Rose fights back into contention after poor start to final round 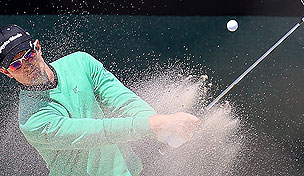 ORLANDO, Fla. – Good news: Justin Rose was in contention for the third consecutive week. Bad news: He still hasn’t won a tournament in 54 weeks, since the WGC-Cadillac Championship last year.

Bogeys on three of the last six holes during the third round, which coincided with a Woods birdie-eagle stretch, quickly had Rose looking up at the man who has won more times at Bay Hill than Rose has won in his PGA Tour career.

Hand it to Rose, though. He stayed tough and rebounded from a poor start to the final round. After two bogeys on the first three holes, he made four birdies in the last 13 holes to finish solo second, thanks to Rickie Fowler’s late triple bogey.

“I think I take a lot of confidence out of this week,” Rose said. “I’m still not sort of getting the most out of my game, which is kind of nice to be having these results and still feel like there is a lot of room for improvement.”

Rose has now tied for fourth at the Honda Classic, tied for eighth at the WGC-Cadillac Championship and the second-place finish here at the Arnold Palmer Invitational in his last three events. He’s also moved to No. 3 in the Official World Golf Ranking, his best-ever position.

To move any higher in the ranking is going to be difficult for Rose, especially if he continues to contend but not win. Rory McIlroy has too much talent to stay in his recent funk and Woods now seems like the Woods of old and enters the Masters as an overwhelming favorite.

Rose, though, would have to be on a short list of favorites to win the Masters. He’s played well at Augusta in the past, and form (save for sketchy putting at times) should allow him to play well again. But, like here at Bay Hill, Rose knows there will be a similar look on the leaderboard.

“Just because (Woods) is the favorite doesn’t mean he has an advantage on the first tee, though,” Rose said.

At least not on the scorecard.