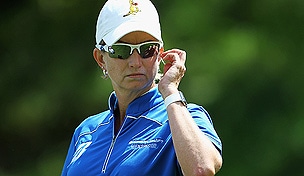 GOLD COAST, Australia - Karrie Webb won her eighth Australian Ladies Masters title on Sunday, coming from two strokes behind in the final round with birdies on three of her last five holes for a 5-under-par 67 and a two-stroke victory.

The 38-year-old Webb birdied the 14th hole at Royal Pines to take the lead for the first time during the final round, and then tapped in for birdie after her eagle putt just missed on 15.

Webb finished with a 13-under-par total of 203 in the 54-hole tournament, the season-opening event on the Ladies European Tour. Her eighth win in the same tournament matched the PGA Tour record of Sam Snead, who won the Greater Greensboro Open eight times.

Webb took the momentum on the par-5 12th hole. Teenagers Oh and Ariya were tied for the lead but Oh walked off the green after a three-putt double bogey seven and Ariya a bogey six, a three-shot swing that allowed Webb, who'd already birdied the hole, to join them at the top of the leaderboard.

In addition to her eight wins, Webb has four seconds on the Gold Coast resort course that was barely playable at the start of the tournament due to 24 inches of rain in the preceding week, the fallout from a tropical cyclone.

Webb played her first Ladies Masters as an amateur in 1993 and won the first of her titles in 1998 by five shots against a field that included then world No. 1 Annika Sorenstam.

Webb was reminded that her previous three victories at Royal Pines - in 2005, 2007 and 2010 - were followed by winless seasons on the LPGA.

''I don't want to raise my expectations too high,'' Webb said. ''I think it tends to backfire on me a little bit and I put a bit too much pressure on myself, but the one thing that feels really good to me is how comfortable I feel on the golf course.''