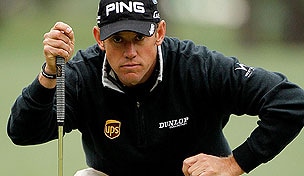 Getty Images
PALM HARBOR, FL - MARCH 20: Steve Stricker plays a shot on the 9th hole during the second round of the Transitions Championship at the Innisbrook Resort and Golf Club on March 20, 2009 in Palm Harbor, Florida. (Photo by Sam Greenwood/Getty Images)  -

He played just about every other sport in England when he was 12, such as football, cricket and rugby. He used to go fishing with his father, but the fish weren't biting, mainly because Westwood kept throwing stones into the water. So off they went to a golf course called Kilton Forest, neither of them having ever so much as swung a club.

''I turned pro at 19 and came on tour, and he was still a 12 handicap, so I can't understand the reasons for that,'' Westwood said. ''He went to every lesson that I've had, drove me there and sat there and listened to it. I just got a bit better than him. Must be down to talent or something like that. I must have my mom's talent for golf.''

Westwood was particularly sharp with his dry humor Wednesday at Pebble Beach, where it's easy to be in a good mood when the landscape is colored with a blue sky, green grass, white surf and a blazing sun.

He is making his first start on the PGA Tour, and this week is a reminder to the 39-year-old Westwood where his career all started.

It was his mother, a podiatrist, who bought a set of golf clubs from a patient in case her son wanted something to do while on holiday from school. It was his father, a math teacher, who had the idea of going to the golf course for the first time.

Nearly 30 years later, Westwood has put together quite the career. He reached No. 1 in the world, ending the five-year reign of Tiger Woods in October 2010. He has won the Order of Merit twice on the European Tour. He has played on eight Ryder Cup teams.

Perhaps it's only fitting that Westwood goes back to his roots at the Pebble Beach National Pro-Am by playing with his father.

John Westwood told the UK version of Golf World that they both shot somewhere in the neighborhood of 180 that first day at Kilton Forest. On the third day, Westwood chipped in for his first birdie, and then his father made a long putt on the same hole for his first birdie.

Pebble Beach is known as the felicitous meeting of land and sea, and the tournament can be an important meeting of PGA Tour players and amateur partners who in most cases are far more successful – CEOs of Fortune 500 companies, stars from other sports that include Wayne Gretzky, Matt Cain and Justin Verlander, actors Bill Murray and Andy Garcia, entertainers like Clay Walker and Kenny G.

It requires patience to get through rounds that approach six hours, with two pros and two amateurs at Pebble Beach, Spyglass Hill and Monterey Peninsula Country Club. Who better to spend the time with than the man who got it all started?

''He's had a massive influence on me,'' Westwood said. ''He's the reason, really, I've got so good at the game. He and my mom invested a lot of time in me when I was growing up.''

Both are in California to rejoice over more than just golf. They celebrated their 43rd anniversary, and his mother, Trish, has a birthday next week.

Pebble Beach is one of the few events on the PGA Tour where the tournament itself is bigger than any one player, though the field is ample.

Phil Mickelson is the defending champion, and he is coming off a four-shot win last week in the Phoenix Open for his 41st career victory on the tour. Mickelson is a four-time winner at Pebble Beach, and another victory would tie the tournament record held by Mark O'Meara.

Dustin Johnson is a two-time winner at Pebble, and it might have been three except for that untidy 82 he had in the final round of the 2010 U.S. Open. Johnson is playing this year with Gretzky, the hockey great whom he knows a little better from dating the Great One's daughter, Paulina.

Still in the tournament is Vijay Singh, another former No. 1 and Pebble champion, drawing plenty of attention for the worst reason. Singh told Sports Illustrated he used deer-antler spray said to contain a substance that is on the banned list of the PGA Tour's anti-doping policy.

Singh admitted to using it in a statement, and under the policy, an admission is equal to a failed drug test. Sanctions have not been announced. The tour has yet to comment, though PGA Tour commissioner Tim Finchem is in town this week.

Also playing is Retief Goosen, a two-time U.S. Open champion who thought his career might be over last year when he discovered he had a disk that disintegrated. Goosen had surgery to replace the disk, returned to golf in January and is feeling better than ever.

Goosen is contemplating a full-time move to Florida, the path that Westwood already has taken. Westwood moved his family to Palm Beach County in December, in time for the kids to start school. He is a PGA Tour member again and believes less travel at his age will only help.

If nothing else, he feels more prepared this year. For a golfer from Worksop, England, living in Florida isn't awful.

''I find it very relaxing, just the weather and getting up in the morning and not having to look out the window and just throw on a pair of shorts and a T-shirt and go,'' Westwood said. ''It's almost too easy.''

But his U.S. schedule starts in a place where players warm up on the putting green with ski caps because of the February chill. That's OK, too.

''It's just a magical place to play golf,'' Westwood said. ''I've always said it's my favorite place. People always ask me where I would like to play my last round of golf. If it wasn't a golf course by a hospital, it would be Pebble Beach.''