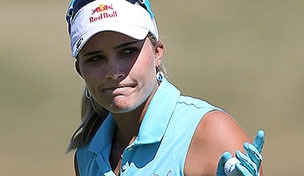 The 18-year-old is among four young LPGA pros featured in this month’s Teen Vogue magazine. Thompson is also in the new Tiger Woods PGA Tour 14 video game due out in two weeks.

Thompson will tell you she puts up better scores in real life than she does when she’s playing as her virtual self. Thompson joins fellow LPGA pros Paula Creamer, Stacy Lewis, Suzann Pettersen and Natalie Gulbis in the new game. While LPGA players have appeared in past editions of the game, this will be the first year the women’s tour will be featured.

“On video games, I’m not too sure what I’m doing,” Thompson said.

Thompson, 18, played with certainty Thursday in the first round of the RR Donnelley LPGA Founders Cup. With a 5-under-par 67, Thompson moved a shot off the lead at JW Marriott’s Wildfire Golf Club.

Thompson made six birdies, an eagle, a double bogey and two bogeys.

At 16, Thompson became the youngest winner of an LPGA event, until Lydia Ko topped her last year, at 15. Thompson is playing her second full season as an LPGA member. She had two runner-up finishes as a rookie last year and finished 21st on the LPGA money list.

But she’s still a teen, and that means she does read Teen Vogue.

“I read Teen Vogue and Seventeen magazines for gossip and some fashion tips and hairstyles and stuff,” Thompson said. “Hey I am a teenager.”