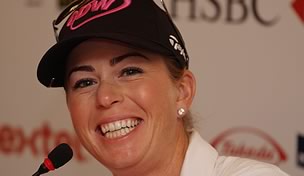 LPGA pros who want to play when golf becomes a part of the Olympics in Rio de Janeiro in 2016 are getting a flavor of the host country this week.

“The Olympics are one of the greatest things that sports has,” Creamer said Friday in a news conference. “I love watching people represent their country, and the fact that golf is now a part of that is very special and very motivating. Hopefully in 2016, I’ll be back here.”

The LPGA returns to official play at the Sybase Match Play Championship May 17-20.