Donald, Furyk back in contention in Tampa Bay 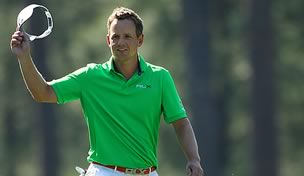 Both men are right back in the mix again this year.

Following rounds of 72-69-67, Furyk is tied for fourth place, one behind the tri-lead of Justin Leonard, Kevin Streelman and George Coetzee.

“I really feel like my game has gotten stronger every day,” said Furyk, who is seeking his first win since the 2010 Tour Championship. “I feel more confident with the putter in my hand, and I'm seeing a couple more putts go in and I think that's giving me some confidence, as well, and that's why my scores are getting better.”

Meanwhile, Donald is one stroke further back – just two off the lead – after making a move on Moving Day with a 4-under 67.

“It was nice to go around this course not make a mistake, not drop a shot,” he said. “I wanted to shoot 5 or 6 under, nearly got there, a couple missed putts and didn't birdie any par 5s. Could have been a really low round today. But yeah, certainly moving in the right direction, as I said, I feel like my game has been close, and obviously starting to show with some results.”