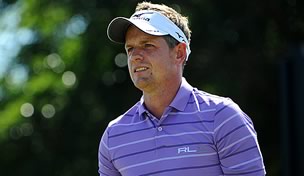 PALM HARBOR, Fla. – We’ve all had instances where one or two holes ruin an otherwise stellar round.

As was the case Thursday for Luke Donald, where his 1-under 70 at the Tampa Bay Championship was marred by a few late mistakes.

“I’m extremely disappointed right now,” the defending champion said after his round. “I played just lovely golf for 16 of the 18 holes today.”

Donald began the day off the 10th tee and played 14 holes in 4 under. He then bogeyed the par-4 sixth hole – his 15th of the day – after his tee ball went left, off the tee into the trees. He chipped out into the fairway and then proceeded to knock it on and two-putt for bogey.

He closed his round with two more bogeys at Nos. 8 and 9 – his 17th and 18th of the day – when he found greenside bunkers at both and failed to get up-and-down.

“I just had it really under control and could have been 6 or 7 under with a couple putts and obviously to finish like that, it leaves a bitter taste in my mouth.”

Midway through the first round Donald sits T-14 and is looking for his first PGA Tour win since his playoff victory over Jim Furyk, Robert Garrigus and Sang-Moon Bae in Tampa last year.