Siem on sponsor's invite in Texas, last shot at Masters 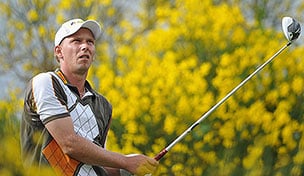 SAN ANTONIO – Staked to a four-shot lead last week in Morocco, Marcel Siem thought he was on the verge of fulfilling a lifelong dream and clinching a Masters berth. Then, on Sunday morning, he received a call from his manager.

“He said, ‘Of course go out there and win today, but there’s another little sweetie out there for you, too,’” Siem recalled Wednesday.

It was the Valero Texas Open, which had extended the German a sponsor exemption into this week’s event.

Little did he know it would represent his last chance to earn a spot in the Masters.

Siem won the European Tour’s Trophee Hassan II, and afterward was informed by officials and media there that the victory would vault him into the top 50 in the world.

Playing at the Shell Houston Open, Henrik Stenson needed to finish 13th or better to move into the top 50, and he did so easily, finishing in a tie for second.

Russell Henley, who already is exempt into the Masters by virtue of his victory earlier this season at the Sony Open, then finished 45th in Houston to lock up the 50th spot, just .0351 points ahead of Siem.

“It was a little upsetting in the end,” Siem said. “I would love to play in the Masters. It’s the biggest thing ever for me, and ever since I was a little boy I wanted to play the Masters.”

But Siem had little time to dwell on the world-ranking math. He took a private, five-hour flight from Morocco to his home in Germany, crashed for about three hours, and then flew to San Antonio for this week’s tournament. In all, he slept about eight hours in the past two days.

Though last week was the cutoff for the Masters via the Official World Ranking, another spot is available this week if the winner is not already qualified. Only Johnson Wagner, in 2008, has been accomplished that feat.

“It’s a shame, but it is what it is,” Siem said. “The good thing is I like Henrik a lot. If it’s a guy you don’t like who kicks you out, it’s pretty bitter. But I’ve got to look on the positive side. I won last week, which is nice, and I have another chance to get in here.”