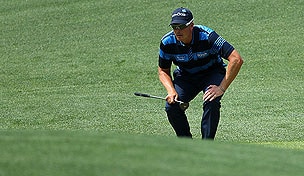 HUMBLE, Texas – Henrik Stenson has some work to do in order to make the Masters field after this week. Through one round at the Shell Houston Open, he’s put himself in decent shape.

Stenson posted an opening-round 3-under 69 that included four birdies and just one bogey. He’ll enter the second round five strokes behind leader D.A. Points.

At 52nd in the Official World Golf Ranking, Stenson needs to be inside the top 50 at week’s end to guarantee a spot in the year’s first major. According to projections from OWGR officials, he’ll “likely” need an eighth-place finish this week. Coincidentally enough, he finished T-8 at last week’s Arnold Palmer Invitational.