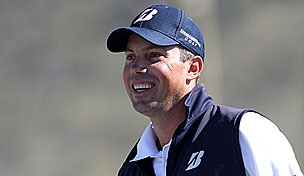 Last year at TPC Sawgrass, Matt Kuchar demonstrated the ability to emerge from an elite-level field. Thursday at Riviera, he rekindled the form that won him the 2012 Players Championship, firing a 7-under 64 to open up a one-shot lead over another strong field at the Northern Trust Open.

Making his first start in nearly a month, Kuchar birdied his first three holes of the day and didn't look back. Four more birdies followed for him on the day, and Kuchar holds a slim lead over Sergio Garcia after the first round.

Like Kuchar, Garcia opened his round with three straight birdies, making seven birdies in total on his round against a lone bogey. The Spaniard, who is one of several top-ranked players making his PGA Tour season debut at Riviera, picked up right where he left off last year, when he fired a 7-under 64 amid tough conditions to finish tied for fourth.

Brandt Jobe sits in third, two shots behind Kuchar following a 5-under 66. Jobe, who played his college golf at nearby UCLA, notched four straight back-nine birdies before dropping his lone shot of the day at the home hole.

Continuing his early-season momentum, PGA Tour rookie James Hahn headlines the group at 4 under, three shots back after a 67 Thursday. Hahn, who already has a pair of top-five finishes in 2013, is joined on that number by Charlie Beljan and Englishman David Lynn, who was runner-up at to Rory McIlroy at last year's PGA Championship.

Having played in the early morning wave, Lee Westwood and Fred Couples are among a large group tied at 3 under following rounds of 68. Couples, 53, is making his 31st career start in this event, having won twice and finished inside the top 10 a remarkable 14 times since his first appearance here in 1982. Charl Schwartzel and Luke Donald, both making their PGA Tour season debuts at Riviera, are in a group one shot further back after firing 2-under 69s.

While many players got off to a strong start Thursday, several big names were not as fortunate. Phil Mickelson and Keegan Bradley, who both lost in a playoff last year to Bill Haas, each fired rounds of even-par 71, while Dustin Johnson struggled to a 5-over 76. Masters champion Bubba Watson, meanwhile, failed to make a single birdie en route to a 6-over 77, tying him for 129th among the 140-man field.