Allen comes from behind to take Gulf Resort Classic 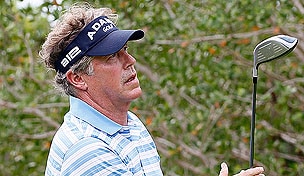 SAUCIER, Miss. – Michael Allen was stunned for a second, staring at the 4-foot par putt he missed on the 18th hole that dropped him into a tie with Bernhard Langer for the lead at the Mississippi Gulf Resort Classic.

Then he felt the whipping wind – gusting to 30 mph at times – hitting him the face. Maybe he wasn't in such a bad spot after all.

''It was very, very tough to judge the wind out there,'' Allen said.

Sure enough, the 54-year-old was back on the 18th green celebrating about 45 minutes later.

Allen started the day two shots behind the leaders, but made five birdies on the front nine to vault into the lead and held on for his first victory of the season and fourth on the Champions Tour. He navigated the windy conditions brilliantly at Fallen Oak until the final five holes, where he had three bogeys.

He finished the day with a 5-under 67 and was 11 under for the tournament, but the missed putt on 18 had put a victory in jeopardy.

Turns out he had already done enough to win.

''It's always nice to get a win,'' Allen said. ''I played great today. I played solid all week and really putted well today. It has its emotional ups and downs – no question.''

Langer was on the 15th hole when Allen finished, and the door was open for him to take the lead or at least force a playoff. But he had to deal with the nasty, unpredictable wind, and his second shot on 16 found the bunker. He eventually settled for bogey to fall a stroke behind Allen.

Langer said he would have hit an 8-iron on that second shot on 16, but moved up to a 5-iron to try to push through the wind. Even that wasn't enough club.

''That was a big blow because I had no shot (out of the bunker),'' Langer said. ''I was coming out of a plugged lie and the green was away from me.''

Langer couldn't make up the stroke on the final two holes – though his chip-in attempt from the rough on 18 for birdie just missed. He finished with a 70.

Russ Cochran had a 67 to tie for third with Gene Sauers and Tom Pernice Jr.

''Wind always changing everything. Doesn't matter what course you play,'' Langer said. ''But this course especially, because the greens are so severe. If you get on the wrong side ... there's no shot. That's what this course can do to you.''

Allen and Langer dueled to finish as the rest of the field fell off the pace. There were 14 players within two strokes of the top spot when play started, but the wind caused plenty of havoc.

Langer, Corey Pavin, Roger Chapman and Joe Daley started the day tied for the lead. Pavin started his final round with four straight bogeys one day after starting with six straight birdies and finished with a 78.

Allen was one of the few who didn't seem to mind the wind. His five straight birdies came on holes 3-8.

''I got control of the tournament on the front nine,'' Allen said. ''I felt really in control of my game and I was playing beautifully, hitting shots where I was trying to. We were judging the wind well for the most part.''

Allen's finish at the Gulf Coast Classic was reminiscent of last season, when he finished second. He was tied for the lead when he finished his round, but Fred Couples won the tournament with a birdie on 18.

This time, he emerged the winner.

He had his first top-10 finish of the year last week in the Toshiba Classic and followed that up with the victory Sunday.