Wie offers no advice to Ko, 15, on turning pro 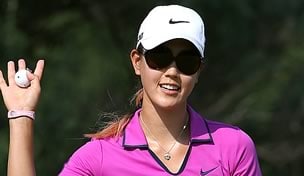 There’s a growing buzz about her future after the 15-year-old amateur sensation won the New Zealand Women’s Open last week for her third professional title in 53 weeks.

Michelle Wie, who turned pro just days before her 16th birthday, likes the affable Ko. Wie was asked what advice she would give Ko about turning pro.

Wie, Ko and Yani Tseng are paired together in the first two rounds of the ISPS Handa Women’s Australian Open this week.

“She’s a phenomenal player,” Wie said. “The fact that she’s won three times in the last 53 weeks, it’s phenomenal. She’s really a nice person as well. She seems like she has a great head on her shoulders. She just seems like a kid. So, I hope she stays that way, and she just keeps getting better. I hope she just enjoys it.”