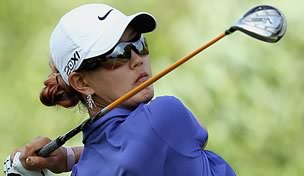 CANBERRA, Australia – Michelle Wie is eager to put a dismal year behind her when she tees off at the Women's Australian Open, the season-opening tournament on the LPGA.

Wie, playing for the first time in Australia, said Tuesday she has done her best to revamp her game after missing the cut in 10 of the 23 LPGA tournaments she played last year as her ranking dropped into the 60s.

''2012 was probably the worst year I've ever had in my entire career,'' she said. ''It was rough. One thing led to another and it kind of snowballed.''

Wie, who turned pro shortly before turning 16 and was awarded exemptions to several PGA Tour events prior to joining the LPGA, said her poor season made her realize she had to work harder to become a better player.

''I just really started from scratch,'' she said. ''Some reporter asked me earlier on what I worked on in the off season and I replied: 'everything.' That's really what I had to work on after last year.

''I saw (coach) David Leadbetter a lot this off season, a lot more than I usually did and just really worked on my swing, my short game, my putting, everything. I wanted my game to be on a whole other level and hopefully 2013 will be really good.''

At age 13, Wie became the youngest player to make an LPGA cut at the 2003 Kraft Nabisco Championship, and went on to make the cut at the U.S. Women's Open later the same year. In 2004, she became the fourth, and youngest, female to play a PGA Tour event at the Sony Open in Hawaii.

Despite winning just two LPGA tournaments since joining the elite women's tour fulltime in 2009 –  the 2009 Lorena Ochoa Invitational and the 2010 Canadian Women's Open – Wie still has her sights set on one day taking on the men in The Masters Tournament.

''You've got to dream high, right? And that's definitely one of my dreams, to play in the Masters, but right now I'm just really focused on this year, this week,'' she said. ''You have to set up really high dreams, dreams that you may or may not achieve in your lifetime, but to still have them. I'm just really focused on winning tournaments this year, just being happy and enjoying golf.''