Unprecedented television coverage dedicated to the 2013 U.S. Open Championship is on tap for golf fans, with NBC and Golf Channel scheduled to present more than 70 live hours of tournament and news coverage, June 9-16.

NBCU digital properties – GolfChannel.com, NBCSports.com, CSNPhilly.com and mobile applications NBC Sports Live Extra and Golf Live Extra – are teaming up to provide the most comprehensive digital coverage of the U.S. Open to date.

TOURNAMENT BROADCAST TEAM:  Bob Costas will reprise his role as network host, when “Golf Channel on NBC” presents its weekend U.S. Open coverage.  Dan Hicks and Johnny Miller will anchor NBC’s four-day coverage, and will be joined by tower reporters Gary Koch and Peter Jacobsen; on-course reporters Roger Maltbie, Mark Rolfing and Notah Begay; interviewer Steve Sands; and essayist Jimmy Roberts.  The team brings intimate knowledge of Merion’s challenging layout, with Miller, Jacobsen, Maltbie and Koch having competed in the U.S. Open the last time it was played at the course in 1981.

56 LIVE HOURS OF NEWS COVERAGE:  Fans will keep connected to the competition and players through 56 hours of live wraparound news coverage of the U.S. Open throughout the week, featuring highlights, inside analysis, player interviews and news conferences, special guest appearances and compelling features.  LIVE FROM THE U.S. OPEN begins Monday with pre-tournament player news conferences and airs throughout the week before and after tournament play. LIVE FROM THE U.S. OPEN will originate from two sets at Merion Golf Club – the main stage overlooking the clubhouse and a stage positioned near the player practice range.  The U.S. Open will be the topic of discussion all week on MORNING DRIVE, the network’s daily morning show.  Co-host and travel expert Matt Ginella will highlight some of the best places to play if you’re heading to Merion or visiting Philadelphia anytime, and Gary Williams will walk the course with USGA Executive Director Mike Davis to discuss Merion’s unique set-up and how Davis gets the course U.S. Open ready.  John Cook, who tied for fourth place in the 1981 U.S. Open at Merion, will be in studio all week.  Additionally, THE GOLF FIX  (Monday, 6-7 p.m. ET) and GREY GOOSE 19th HOLE (expanding to one hour Wednesday, June 12, 6-7 p.m. ET) will air live from Merion Golf Club.

In addition to news and expert analysis, Golf Channel’s LIVE FROM THE U.S. OPEN telecasts will incorporate special production elements to bring viewers even closer to the players.  Robotic and jib cameras providing sweeping video will be positioned throughout the player practice area, capturing unique inside-the-ropes footage.  And a special “Fly Cam” will be fixed to a cable stretched across the entire length of the practice range and over the players, designed to feature unique angles of players as they prepare for competition.  This footage also will be utilized during NBC’s live coverage to showcase the leaders as they prepare for competition.

LIVE FROM THE U.S. OPEN FEATURES:
• The Boutique Open – Merion Golf Club’s friendly confines and tight layout will be a difficult test for the players, who will need to have a clear strategy of attack.
• Nobilo Goes Tee to Green – Nobilo recently scouted the Merion Golf Club layout and will host a series of features that will provide insight into the various ways players will try to conquer the golf course.
• Michael Breed Tutorial – Merion features seven, par-4 holes less than 430 yards, so a short game will be critical to success.  Breed, host of THE GOLF FIX, will demonstrate how wedge play could mean the difference between success and failure.
• Merion History – Merion Golf Club has played host to more USGA Championships than any course in America and has created some of the most memorable moments.  It’s where Bobby Jones completed golf’s Grand Slam at the 1930 U.S. Amateur and where Ben Hogan striped the awe-inspiring 1-iron on the 72nd hole in the 1950 U.S. Open.
• Jim Simons – Simons was the last amateur to lead a major championship after 54 holes but, despite his success in the tournament, his career, subsequently, fell on hard times.
• David Graham – Graham won the 1981 U.S. Open with a score of 67 on Sunday, what some say was the perfect round of golf.
• The Francis Ouimet Story – 100th anniversary of Ouimet’s unlikely victory as an amateur at the 1913 U.S. Open at The Country Club in Brookline, Mass., against the likes of superstars Harry Vardon and Ted Ray has been credited with bringing golf to the American sporting mainstream.
• Jim Furyk:  As part of Golf Channel’s celebration of Father’s Day, Golf Channel will celebrate the 10th anniversary of Pennsylvania native Jim Furyk’s 2003 U.S. Open win at Olympia Fields Country Club outside Chicago.  Furyk has always been coached by his father, Mike, who has nurtured one of golf’s most unusual homemade swings.
• The First Tee – A look at the amazing life story of youngster, Zakki Blatt, who overcame the odds with the help of The First Tee.  The feature also takes a closer look at the Philadelphia chapter of The First Tee.

TREVINO 1971 U.S. OPEN RETROSPECTIVE:  As the U.S. Open prepares for its return to Merion, NBC and Golf Channel will present 1971 U.S. OPEN:  LEE TREVINO AN AMERICAN CHAMPION, a 60-minute retrospective documenting Trevino’s life and victory at Merion in 1971, and how he claimed his place among the great champions in U.S. Open history by beating the great Jack Nicklaus in a Monday playoff.  Produced in association with the United States Golf Association, the documentary will premiere on NBC on Sunday, June 9 at 5 p.m. ET, and air throughout June on Golf Channel.

Comcast SportsNet Philadelphia and NBC10 Philadelphia will present Philadelphians with the most comprehensive local coverage of the 2013 U.S. Open Championship, with the majority of content originating from Merion Golf Club:

DIGITAL COVERAGE:  NBC and Golf Channel digital properties – GolfChannel.com, as well as mobile applications NBC Sports Live Extra and Golf Live Extra – are teaming up to provide the most comprehensive digital coverage of the U.S. Open to date.

Live Streaming
Live tournament coverage will be streamed on NBCSports.com and via the NBC Sports Live Extra app.  Fans who are customers of participating cable, satellite, telco and other video subscription services, will be able to enjoy 24/7 streaming of Golf Channel content via GolfChannel.com and Golf Channel’s mobile application, Golf Live Extra.

Editorial, Blogs & Live Chats
GolfChannel.com’s dedicated staff of writers – including Rex Hoggard, Jason Sobel, Randall Mell, Ryan Lavner and Jay Coffin – will be on site at Merion Golf Club all week, providing the most up-to-date news, features and blogs posts.  Joe Posnanski also will post from NBCSports.com.  The team will preview the U.S. Open with features exploring the five-year anniversary of Tiger Woods’ last major championship win; Rickie Fowler on the challenge of Merion, while reflecting on his play there in 2009 as part of the U.S. Walker Cup team; a history of Merion; and a profile of David Graham, the last winner of the U.S. Open at Merion and an International Team captain who was ousted by his players during a Presidents Cup competition.  Sobel and contributor John Hawkins also will host live chats during each day of competition.

Social
GolfChannel.com features the Golf Channel Social Lounge (www.GolfChannel.com/sociallounge), a recently launched social center that aggregates all social media posts related to the U.S. Open in one location on the site.  The Social Lounge currently is aggregating all content on Twitter, Facebook and Instagram mentioning @usopengolf.

PACE OF PLAY:  Golf Channel will mark the beginning of its U.S. Open coverage on June 1 with a unique, month-long program dedicated to help promote ideas and initiatives that improve pace of play and assist with the growth of the game.   Titled “It’s About Time,” the company-wide campaign will be conducted in partnership with the United States Golf Association, with each week of the month tied to concepts that will help golfers and golf course operators understand the problems and adopt new strategies for faster play. 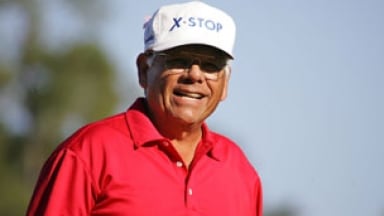 Watch the premiere of 1971 U.S. Open: Lee Trevino an American Champion tonight at 10PM ET only on Golf Channel.