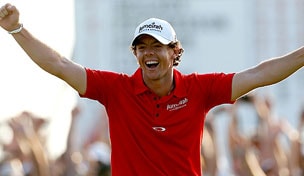 Getty Images
AVONDALE, LA - APRIL 24: John Senden of Australia tees off on the 4th hole during the third round of the Zurich Classic at TPC Louisiana on April 24, 2010 in Avondale, Louisiana. (Photo by Chris Trotman/Getty Images)  -

Six-time major winner Nick Faldo said Tuesday that Rory McIlroy has a unique opportunity to become the first European player to win the career grand slam, and that the Northern Irishman should “do everything to gear his schedule and the rest of his career for the majors.”

After winning the PGA Championship on Sunday by a record eight strokes, McIlroy has now captured his second major title at 23 years and 3 months – ahead of the pace set by Tiger Woods.

When asked about McIlroy’s prospects to capture the career grand slam, Faldo told the Irish Times, “He’s got half of them already, and he’s right there, anything can happen. You can’t predict anything but he now knows, and more importantly, the rest of the field knows, that when he is on they might be playing for second place.”

In 2013, McIlroy will take aim at the two titles missing from his major resume: the Masters and Open Championship. Last year, he frittered away a four-shot lead during the final round at Augusta National. Said Faldo, according to the report, “That scar is well and truly rubbed out now. I bet he can’t wait to get back to Augusta.”

If not for a second-round 80 at the 2010 Open, he may have walked away with the claret jug at St. Andrews. But last year, a frustrated McIlroy woofed that he’s “not a fan of golf tournaments that the outcome is predicted so much by the weather,” lending credence to the belief that the Open may be his most difficult conquest. He was T-60 at this year’s British Open at Royal Lytham.

But two majors at age 23? Hey, that’s a pretty good start on the career grand slam.