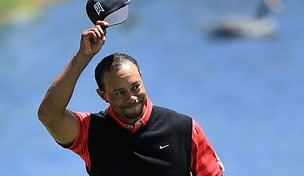 ORLANDO, Fla. – Even before Tiger Woods won the Arnold Palmer Invitational for the eighth time, he was asked on several occasions what it was about Bay Hill that brings him so much success. Finally, he gave an answer that applies to more than just him.

''Once we figure out what courses we like, we tend to play those,'' Woods said.

Brendan Steele finished his round Saturday and was on the range making small talk when he was asked about his schedule the next few weeks, such as the Texas Open.

''Nah, I don't think I'm going to play there,'' Steele said with a slight grin.

The light came on for the reporter who realized that San Antonio is where Steele won for the first time. He laughed.

Woods has established a schedule that is easy to predict. It's based on the courses where he does well.

The last time Woods won a tournament the first time seeing the course as a professional? The 1998 BellSouth Classic at the TPC Sugarloaf.

Of the 34 golf courses on which he has won on the PGA Tour, only five have been on original TPC designs - Boston, Sawgrass, Sugarloaf, Summerlin, Las Colinas.

SLUMPING: Robert Allenby managed a smile when someone told him to remember to show up Sunday at Bay Hill.

The Arnold Palmer Invitational was the first time that Allenby played on Sunday in a full-field PGA Tour event since the St. Jude Classic last June. Since then, he has missed the cut 16 times in official events and withdrew once. He finished 69th in the Bridgestone Invitational (a World Golf Championship with no cut) and tied for 79th in The McGladrey Classic, where he missed the 54-hole cut after more than 78 players made it to the weekend.

He might not have been around for the weekend at Bay Hill. But when club pro Rod Perry made a bogey on the final hole in the final group Friday, that let in eight players, including Allenby. Fittingly, Allenby played with Perry on Saturday.

DIVOTS: The LPGA's season finale will be played at Tiburon Golf Club at the Ritz-Carlton Golf Resort in Naples, Fla. The Titleholders was held last year at TwinEagles Golf Club across town. The Titleholders also is boosting the biggest prize in women's golf to $700,000 for the winner. Na Yeon Choi earned $500,000 last year. ... Tiger Woods has won his last nine PGA Tour events by at least two shots. ... Keegan Bradley cracked the top 10 in the world ranking for the first time with his tie for third at Bay Hill. He became the 89th player to reach the top 10 since the ranking began in 1986. Justin Rose, the runner-up at Bay Hill, moved up to a career-best No. 3. ... Tiger Woods won for the sixth time on a Monday, only one of them planned - the Deutsche Bank Championship in 2006, which traditionally ends on Labor Day. ... Rory McIlroy is playing the Houston Open pro-am with former Dallas Cowboys running back Emmitt Smith and race car owner Roger Penske.

FINAL WORD: ''The pre-shot routine used to be one sentence. Now it's a paragraph.'' - Johnny Miller.