Notes: Mahan thinks Woods is back without major 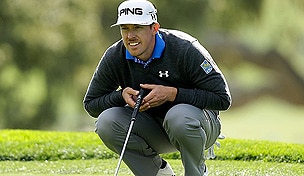 HUMBLE, Texas – Hunter Mahan doesn't believe Tiger Woods has to win a major to validate his return to No. 1 in the world.

Woods fell to as low as No. 58 toward the end of 2011. But after winning at Bay Hill for his sixth PGA Tour title in the last 53 weeks, Woods returned to the top of the ranking for the first time since October 2010. Woods hasn't won a major, however, since the 2008 U.S. Open at Torrey Pines.

''I think he's the man once again, and he proved that last week,'' Mahan said Wednesday at the Houston Open. ''Everyone is waiting for the first major. I don't know why they're waiting for that. I think he's done enough this year to realize that he's still really good, and he's better than everybody else. He set the bar so high. I don't know what is going to make everyone go, 'He's back to that time.' I don't know if he has to win by 10 shots or whatever.''

Mahan doesn't buy into the notion of Woods or anyone else being able to intimidate players, though he's willing to make one exception.

Mahan then recalled a scene he witnessed at the 2006 British Open at Hoylake, which Woods won by two shots despite hitting only one driver all week. It was the third round at Royal Liverpool. Mahan, who went into the weekend 11 shots out of the lead, played early and shot 68 when he saw Woods going to the range for his afternoon start.

''He came out and walked on the range, and it was the most intimidating thing I've ever seen,'' Mahan said. ''He just walked out of the car, and we were hitting balls and everyone on the range ... everybody stopped and watched him. He just had this look like, ''This is what I need to do.' You can tell he was just in this zone. That was intimidating.

NEW TOWN, OLD FACE: Mark O'Meara moved to Houston with his new wife four years ago and has become involved through friends with The First Tee in Houston, one of the most successful chapters in the country.

That's what led him to ask for a sponsor's exemption to the Houston Open, which he is playing for the first time in nearly 10 years.

''To come out and play with the young kids is always fun,'' O'Meara said. ''To see some new players on Tour, see some of the older guys I played with a long time ago ... hopefully, I can get out there and play well. I understand that I'm not a young guy anymore, but I still think at 56 ... when I played in Dubai, I played well, made the cut. I beat about 12 or 13 other guys.''

One of the guys he played with was Oliver Fisher, and it was a sharp reminder of how long O'Meara has been around. He realized he first joined the PGA Tour before Fisher was even born.

''Reality starts to set in,'' O'Meara said. ''As time goes on, I realize how fortunate I've been to play an amazing game. I'm really excited about the opportunity to come and play at the Shell Houston Open. Like I said, I plan on trying to play well. No matter what happens, I'll give it my best out there.''

It has been 15 years since O'Meara set a record at age 41 as the oldest player to win two majors (Masters, British Open) in the same season.

RETURNING THE FAVOR: Steve Stricker has built his limited schedule this year around the majors, the World Golf Championships and the tournaments where he is a past champion.

The Houston Open is one of the exceptions.

Stricker didn't have his full PGA Tour card in 2006 when tournament director Steve Timms gave him a sponsor's exemption to the Houston Open. Stricker tied for fourth and was on his way. He not only regained his card, he was the 36-hole leader at the U.S. Open and was given serious consideration as a captain's pick for the Ryder Cup.

Since then, he has won nine times on the PGA Tour, been part of every Ryder Cup or Presidents Cup team and reached as high as No. 2 in the world. And he made history as the only player to win PGA Tour comeback player of the year in consecutive seasons.

''I enjoy coming here,'' Stricker said. ''It brings back a lot of good memories. He (Timms) gave me a spot in ’06 when I needed a spot. Played well, and went on to play well that year and ever since, really. I owe a lot to him, and we've become a little closer over the years. And he's a good guy and they run a good tournament here, and I've always enjoyed coming here. As long as I'm eligible to come here, I probably will.''