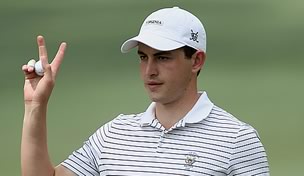 LOS ANGELES – The good news for Patrick Cantlay is that he'll tee it up Thursday at Riviera in his hometown tournament.

He can only hope it doesn't cost him down the road.

Cantlay, who shot 60 at the Travelers Championship in 2011 while still at UCLA, was given a sponsor's exemption to the Northern Trust Open, one of seven he is allowed this year because is not a PGA Tour member. It looked as if he wouldn't have to use it when Cantlay closed with a 67 at Pebble Beach and tied for ninth. Anyone finishing in the top 10 gets into the next open tournament.

But that's when everything seemed to conspire against him.

The field at Riviera is so strong that it already was filled with regular members. There was no room left for top-10 players from the previous week.

''There's only a few occasions in the last five to 10 years when a top-10 category was the last man in the field,'' said Tyler Dennis, the Tour's vice president of competition. As for no one from the top 10 getting in? ''Very rare,'' he said.

James Hahn and Patrick Reed, graduates of the Web.com Tour and Q-school, finished ahead of Cantlay at Pebble. They didn't get in, either, instead going to the top of the alternate list. By Monday, they were in the tournament after Hank Kuehne and Jhonattan Vegas withdrew.

Dennis said the Tour's regulation allows for a player's top-10 finish to carry over into the next event – The Honda Classic, in this case – if he doesn't get in a tournament. But it doesn't apply in this case because Cantlay is playing the Northern Trust Open.

The only way to save that exemption would have been taking a big risk – pull him out of the tournament before noon Monday with hopes that enough players would have withdrawn for him to make it into the field as an alternate.

Pebble Beach was Cantlay's first cut this year, and he made $175,500. That will help in his bid to reach a level where he could get unlimited exemptions. But by having to use the sponsor exemption, it puts a little more pressure on him to play his best in the limited starts he has.

BRITISH OPEN CHANGES: Players no longer will have to figure out special money lists to determine whether they can get into the British Open.

The Royal & Ancient made a few tweaks to its qualifying process this year. Instead of a special money list on the PGA Tour and European Tour, that has been eliminated in favor of additional spots on their money lists much closer to the Open.

The same applies to the European Tour.

CHOI AWARD: K.J. Choi has been selected to receive the Charlie Bartlett Award from the Golf Writers Association of America, which honors a professional golfer for unselfish contributions for the betterment of society.

The 42-year-old from South Korea founded the K.J. Choi Foundation in 2007 to help children and communities break the cycle of hopelessness and achieve their dreams. His reach has extended to scholarships and global aid for hurricane and tsunami victims.

''I would like to thank all of those who have supported me,'' Choi said. ''Without them, I would never have been able to be in a position to be helping others. Although I feel that I haven't done that much, I am honored to be recognized for my actions. This is the first award of any sort that I have received during my 13-year career on the PGA Tour and I feel that much honored to be receiving an award for my charitable actions rather than my play.''

His eight wins include The Players Championship – he donated $200,000 of his paycheck to victims of the tornadoes that hit the southeastern U.S. that year – and Choi has played on three Presidents Cup teams.

He will be honored April 10 at the GWAA Annual Awards Dinner in Augusta, Ga.

DIVOTS: Retief Goosen needed only one tournament to get the $76,336 required while playing on a major medical exemption. Goosen missed the last three months of the year after back surgery. He tied for ninth at Pebble Beach and earned $175,500. ... Four players who started the year outside the top 100 qualified for the 64-man field at the Match Play Championship – Richard Sterne (154), Russell Henley (131), Charles Howell III (117) and Chris Wood (139). Howell is the only one who moved into the top 64 without winning a tournament. He lost in a playoff at the Humana Challenge, tied for third at the Sony Open and tied for ninth at Torrey Pines. ... The winner of the VisitMesa.com Gateway Classic on the LPGA Tour's developmental tour will earn a spot in the RR Donnelley LPGA Founders Cup in Phoenix. ... Lydia Ko, who won the Canadian Women's Open last year, is among nine amateurs who were invited to play in the Kraft Nabisco Championship, the first LPGA Tour major of the year.

FINAL WORD: ''The beauty of our sport is that you're only one week away.'' - Joe Durant, playing on limited status this year as a past champion.