Notes: Mickelson has special club in mind for Masters 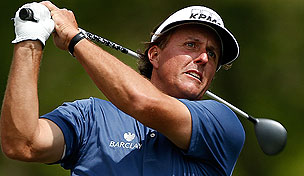 HUMBLE, Texas – Phil Mickelson has something special planned for Augusta National this year.

A special club, that is.

Mickelson shot a 71 on Friday at the Houston Open and will get in two more rounds in his final tuneup before the Masters in two weeks.

He shot a 72 on Thursday with a driver in his bag, then took it out and added a 3-wood ''that's more like a driver'' for his second round. The new 3-wood produces a lower ball flight and more run in the fairway.

So what's the plan for Augusta?

Mickelson, the 2011 champion, rallied with three straight birdies on the back nine Friday, fueling optimism for the weekend. Two years ago, he was five shots back after two rounds, then shot 63-65 on the weekend to win by three.

SNEDS SLIDING: Brandt Snedeker left the PGA Tour with a rib injury as the hottest player in golf - runner-up to Tiger Woods and Mickelson in successive weeks, and then a winner at Pebble Beach. He goes into the Masters having missed his last two cuts.

Snedeker returned last week at Bay Hill after missing a month to heal his ribs. He missed the cut there, and Friday at the Houston Open. Needing a birdie, he went for the green on the par-5 eighth hole and found the water, leading to bogey. He finished at 1-over 145.

Snedeker is not playing in the Texas Open. He will spend next week at Sea Island, where the greens are at about 13 to 14 on the Stimpmeter to prepare for the Masters.

He's not in top form, though Snedeker doesn't feel he is that far off.

''Looking back on it, I was playing good,'' he said. ''The things I was doing so good was minimizing my mistakes and maximizing my rounds. Right now I'm not.''

MASTERS UPDATE: Geoff Ogilvy is out of the Masters unless he wins the Texas Open, and though he's entered in the event next week in San Antonio, it wasn't clear if he will play.

The top 50 in the world after this week are eligible for the first major of the year. Ogilvy was at No. 50, though he will fall out after missing the cut. Ogilvy was No. 47 after his runner-up finish at the Honda Classic, but he finished toward the bottom of the pack in his next two events, and then missed the cut his last two weeks.

Henrik Stenson is now in the best position to crack the top 50. He was at 5-under 139 going into the weekend. He could get in with a top-40 finish, though that might depend on whether Marcel Siem wins in Morocco on the European Tour.

Augusta native Charles Howell III needs to finish alone in fourth. He had a 72 on Friday and was seven shots out of the lead.

COMFORT ZONE: Brian Davis is contending at the Houston Open for the second straight year.

The 38-year-old Englishman was 7 under par after shooting a 70 on Friday morning. Last year, Davis started 68-65 and tied for fourth, four strokes behind winner Hunter Mahan.

Redstone would seem to favor longer hitters, with its wide fairways and light rough, but Davis came in ranked 150th in driving distance.

''If you play well anywhere, you can get in contention,'' Davis said.

Davis had four top-10 finishes and earned $1.3 million in 2012. He's looking for a turnaround week after missing five cuts in his first eight starts this year.

''It's a funny game,'' Davis said. ''You don't feel like you play bad and, all of a sudden, you're in contention. That's just the way the game goes.''

MISSING CHAMPIONS: Mickelson is the only former champion to make the cut in Houston.

ACES WILD: Carl Pettersson holed a pitching wedge on the 143-yard seventh hole, the first ace of the tournament. It's the first hole-in-one in the Houston Open since 2011, when Brandt Jobe aced No. 7 in the final round with an 8-iron.

BACKING OUT: Sean O'Hair, who shot a 76 in the first round, withdrew Friday morning because of a back injury.