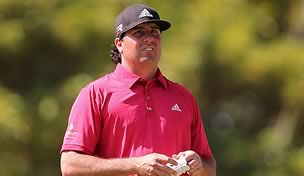 Getty Images
SAN ANTONIO, TX - APRIL 17: Brandt Snedeker follows through on a bunker shot during the final round of the Valero Texas Open at the AT&T Oaks Course at TPC San Antonio on April 17, 2011 in San Antonio, Texas. (Photo by Darren Carroll/Getty Images)  -

Perez loved the way Kuchar was rolling his rock, so much so that he called around and decided to have a replica built of Kuchar’s long putter.

For three weeks, Perez practiced on his putting green at home in Scottsdale, Ariz., placing the butt end of the club alongside his inner right arm and up to his elbow, just like Kuchar does.

“I loved how everything worked together, especially my elbow and shoulders,” Perez explained on the Bay Hill driving range Tuesday as he prepared for the Arnold Palmer Invitation, which begins Thursday. “The putter face stays square so much longer.”

Perez liked the feel of his new stroke so much that he put it in play for the first time last week at the Tampa Bay Championship.

After opening with two rounds of even-par 71 on the difficult Copperhead Course, Perez started to see the putts drop, shooting 70 on Saturday and 67 on Sunday, making birdie on 14, 15 and 18 to finish a season-best tied for seventh. Perez moved to 82nd, from 110th, in strokes gained putting after Tampa. He was ranked 60th last year.

Perez on Tuesday speculated that the U.S. Golf Association and Royal & Ancient’s proposed anchor ban would prompt players who anchor to adopt Kuchar’s putting style instead. (Kuchar’s method is allowed under the proposed ban).

“There is no greater feeling in the world than standing over a 10-footer and knowing that you’re going to make it,” said Perez, 37, who insists that he will not be going back to a conventional putter. “I’ll use this until I’m done.”