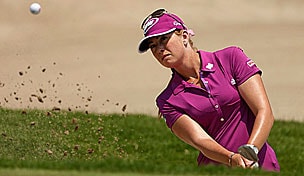 SINGAPORE – Stacy Lewis had to share the lead with Na Yeon Choi at the HSBC Women's Champions after the South Korean birdied the 18th hole in a rain-delayed third round on Saturday.

Paula Creamer, who injured her shoulder in a car accident after a tournament in Thailand last weekend, shot 69 to move into third place at 12-under 204.

Lewis and Choi were in the last group on the course and had just teed off on the 18th when a thunderstorm rolled in, causing play to be suspended for nearly 2 1/2 hours.

Lewis was up a stroke when they left the course, but when they returned, Choi hit a 10-foot birdie putt to pull even heading into Sunday.

The two golfers traded turns in the lead throughout the day, with neither able to pull away for good.

Lewis bogeyed holes No. 1 and 3 to fall two strokes behind Choi. Lewis pulled even after reeling off three straight birdies – including one with a 25-foot putt on No. 8 that barely caught the edge of the hole and dropped in.

Choi moved atop the leaderboard again with a birdie on the 14th hole, but she bogeyed the next hole after missing a long par putt to give the lead right back.

Lewis maintained the one-shot advantage going into the 18th hole. And then the rain came.

''It was very frustrating,'' Lewis said. ''It is what it is and luckily we got finished today.

''It's going to be tight tomorrow and we are going to have to make some putts,'' she added.

Creamer, who was in the next-to-last group, said she felt lucky she barely made it off before the thunder and lightning started.

''Sometimes it has its perks being second to last,'' she said. ''Dinner will taste a lot better, especially not having to grind it out on the last hole.''

Creamer, the 2010 U.S. Open champion, had low expectations coming into the tournament after injuring her shoulder in a five-car accident on the way to the Bangkok airport on Sunday night.

The pain was so bad Thursday morning, she said, she wasn't sure if she'd be able to play. She persevered, however, and now sits two shots off the lead going into the final round.

''I'm just so pleased to be out here, and let alone to be in contention on Sunday,'' she said. ''That's just beyond my imagination of what I thought even teeing it up on Thursday.''