Mickelson, caddie not surprised by performance 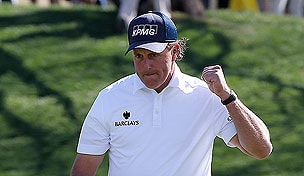 SCOTTSDALE, Ariz. – You may be excused if you didn’t see this coming. You’re off the hook if you looked at Phil Mickelson’s 37th- and 51st-place finishes in his first two starts of this year, with only three of eight rounds in the 60s, and figured he was headed toward another week of mediocrity here at the Waste Management Phoenix Open.

In fact, you’re probably part of the majority if you had lowered expectations for his season, at least in the short term. So far this year, he was hitting it short and crooked – and not just with his driver. Even the putter wasn’t going in the right direction. Based on all that evidence, who in their right mind would think he was on the verge of not only success, but potentially record-setting success?

Here’s who: Mickelson himself. And his caddie, Jim “Bones” Mackay.

“We talked a little bit in the offseason,” Mackay said after his man posted a 7-under 64 to grab a six-stroke lead entering the final round. “He played really well in Asia, then he went home and told me he was continuing to play really, really well. Then he got pretty darn sick right before the Hope; I actually didn’t think he was going to play. So I think he had to get better and had to get it back a little bit. It took a little longer to knock the rust off, but I don’t think he’s surprised he’s playing as well as he is this week.”

“Before the season started, I had been playing really well, kind of like I am this week as far as iron play and so forth; I had been putting well,” Mickelson maintained. “Then I started at Humana and shot 72 at La Quinta and putted terribly and hit some bad shots, and it progressively got worse. I knew it wasn't far off. There was just a fraction, whether it was in the address position, setup, or whatnot.”

So he called instructor Butch Harmon and asked for help.

“We spent an hour and 15 minutes on the range, and it was just a minor tweak, and all of a sudden the club is back on plane and I'm hitting it the way I was,” Mickelson continued. “Certainly tying for 37th and 50-something doesn't really indicate this kind of play coming the next week, I understand that, but it did not feel far off. I felt like I was ready to click.”

He’s clicked with some video-game type of numbers, the kind found only on the easy mode in the most benign conditions. But the lefthander has made them all too real.

Saturday’s round of 64 followed opening scores of 60-65 and left him within one shot of the PGA Tour’s all-time 54-hole scoring record.

He also nearly made history of another kind.

If there’s a defining moment at the Waste Management Phoenix Open, it’s a 21-year-old Tiger Woods, in a baggy shirt that covered his elbows and barely looking old enough to shave, dropping a hole-in-one at the famous 16th hole that made the earth shake and beer come raining from the sky.

That moment nearly had to make room on the top shelf for another on Saturday afternoon, when Mickelson stepped to the very same tee box, pulled out his 9-iron and hit a shot that stopped a mere 20 inches from becoming the ninth tournament ace at that hole.

Most players hand out hats or sunglasses or T-shirts at 16. Mickelson handed out goosebumps.

“It was a pretty good shot,” he later said with a knowing smile.

Pretty good shots and knowing smiles have become the theme of the week for Mickelson, whose near-ace at 16 was part of a four-birdie closing stretch that extended his lead from four entering the day to six when it was over.

If that doesn’t sound impressive, just listen to his fellow contenders.

“Being in the lead is probably the hardest thing to do in professional golf, there's no doubt about it,” said Padraig Harrington, currently in a share of third place. “You've got to try and keep going forward. The pressure is on not to mess up. You know, I truly admire front runners who can keep true at that stage, because it is a difficult proposition to keep hitting, keep going at the flag.”

“For the most part, you will have a stretch where your stuff doesn't go in or you get a few bad breaks,” added Brandt Snedeker, in second place. “I guess Phil hadn't gotten that, or if he had, he played right through it.”

He’s played right through a lot of things in his career, so dusting himself off after a couple of disappointing results shouldn’t come as much of a surprise.

And it doesn’t, at least not to Mickelson and the man who has been with him every step of the way.

“It’s so hard to compare it to playing a major, because it’s a completely different setup. The first two rounds at Baltusrol in ’05, he basically won it those rounds because he played so well,” Mackay said. “But this is way up there in terms of the golf he’s played. I mean, driving it like he’s driven it. Distance control has been outstanding. All of that stuff. He’s played really well.”

You probably didn’t see this coming. Mickelson and Mackay, though, knew this type of golf wasn’t far off, even when the scores said otherwise.