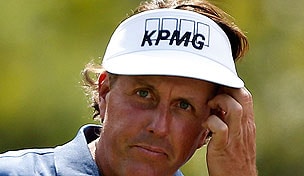 Getty Images
VIRGINIA WATER, ENGLAND - MAY 21: Miguel Angel Jimenez of Spain prepares to tee off at the 3rd hole during the second round of the BMW PGA Championship on the West Course at Wentworth on May 21, 2010 in Virginia Water, England. (Photo by Ross Kinnaird/Getty Images)  -

With a water hazard guarding the entire left side, Mickelson hit his tee shot into the water during each of the first two rounds, carding a pair of double bogeys in the process.

“It is a tough hole,” he said Friday. “It's a hole you have to stand up and hit a great tee shot or else you're in the hazard. Unfortunately, I've hit two tee shots that weren't great that went in the water and I made double both times. It's a challenging hole. It looks a lot easier than it is, but everything is banked into the hazard.”

If that’s the bad news, then the good news is that Mickelson has played the other 34 holes in 5 under so far, with nine total birdies.

On Friday, he followed an opening-round 72 with a 1-under 71 that left him with some encouraging signs – especially on the back nine.

“The back nine I played really well,” said Mickelson, who was 2 under on those holes. “Could have been a lot lower. I feel like I finally started to hit some good shots. Feel pretty good on the greens and I'm excited about tomorrow, because I feel like I have a chance now with the way I'm hitting, then we have weather like this, I can still shoot a low round. Tomorrow might be an opportunity to make up some ground that today didn't provide, given the way I didn't hit great shots early on.”

This week marks the final start for Mickelson before the three-time Masters champion heads to Augusta National.