Lefty in control for 13 holes at Shell Houston 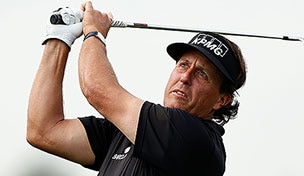 Getty Images
DUBLIN, OH - JUNE 04: Rickie Fowler (right) is pictured with Ohio State Golf Coach Donnie Darr on the 13th hole during the second round of The Memorial Tournament presented by Morgan Stanley at Muirfield Village Golf Club on June 4, 2010 in Dublin, Ohio. Darr is the caddy for Fowler this week. (Photo by Andy Lyons/Getty Images)  -

HUMBLE, Texas – When last we saw Phil Mickelson, he was trudging off Bay Hill last Friday following a 79 that included two triple bogeys, paving his way to a missed cut.

He appeared to have things figured out at the Shell Houston Open, though, turning around his game to get onto the leaderboard.

Mickelson carded four birdies to get to 4 under for the day with five holes to play, but a drive on the par-4 fifth hole – his 14th of the day – found the water hazard guarding the left side and led to double bogey. He added bogeys on Nos. 6 and 9, as well, to finish the day at even-par 72.

“It was a disappointing finish, obviously,” he explained. “But there’s a lot of golf left and I feel as though each day I’m getting better. I know what it is I’m working on with my golf swing and the more practice I get in, the more confidence I get and hopefully it will carry out to the golf course.”

The three-time Masters champion also reiterated his distaste for this tournament being moved to two weeks before the year’s first major. He usually plays this event as a final tune-up going into Augusta.

“I haven’t taken the week off before the Masters in a couple of decades, I think, and the same thing with the U.S. Open,” he said. “But I’m going to have to learn how to do that now that we’re not really having tournaments conducive to getting ready for those tournaments.”