Phil not surprised by slow start on Day 1 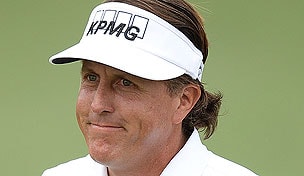 AUGUSTA, Ga. – The “Phrankenwood” was fine. Phil Mickelson couldn’t say the same for the rest of his game on Day 1 at Augusta National.

The three-time champion and perennial contender at the year’s first major opened with a quiet round of 1-under 71 and is tied for 23rd, although it was not entirely unexpected.

“It’s pretty much what we talked about earlier in the week,” said Mickelson, who played well with his converted fairway wood he calls a “driver substitute.” “I came out kind of passive and tentative and then started swinging the club better on the back.”

The card backs up Mickelson’s take. He posted a 2-over 38 on the outward loop, but rallied with a 3-under back nine to keep his title chances alive, but he will need to change his game plan on Friday.

Slower and softer than expected greens led to low scores on Day 1, a surprise for Mickelson who has come to expect a much more demanding golf course when play begins on Thursday.

“The greens are soft and slow and consequently there are 32 players under par,” he said. “I’m going to have to change the way I’ve come to play this golf course and be more aggressive.”