Mickelson flirts with 59, leads by 4 in Phoenix 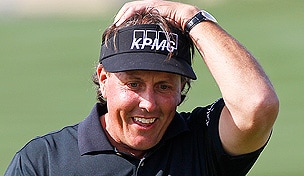 After his birdie effort improbably lipped out on the ninth hole, his 18th of the day, that was the total distance that separated Phil Mickelson from golf's ultimate number.

Despite the near-miss, Mickelson left TPC Scottsdale with an 11-under 60, matching his career best and taking a four-shot lead at the Waste Management Phoenix Open, where first-round play was suspended late Thursday due to darkness.

'You don't get chances to shoot 59 very often,' Mickelson said after the round. 'To have that putt on-line, I'm kind of mortified that it didn't go in.'

Lefty's round featured 11 birdies, including one on each of the par-3s at TPC Scottsdale. He began his day with four straight birdies and went out in 7-under 29, ultimately joining Zach Johnson as the only other player to shoot 60 or better multiple times on the PGA Tour. One of the few putts that failed to drop Thursday, though, may be a difficult memory to shake for Mickelson.

'That one is tough to take,' he said of the 25-foot putt on the ninth that appeared likely to drop until the final moments. 'You don't get those chances very often.'

He leads by four shots over a group that includes reigning FedEx Cup champion Brandt Snedeker, a runner-up to Tiger Woods last week at Torrey Pines, and with 3-time major winner Padraig Harrington, who both opened with 7-under 64s. Tour rookie and Ryder Cup star Nicolas Colsaerts, 2011 FedEx Cup champion Bill Haas and Brian Gay, a winner two weeks ago at the Humana Challenge, all likely did not expect to be five shots behind after each carded a 6-under 65 Thursday.

After the flu forced him to withdraw from last week's Farmers Insurance Open, Bubba Watson returned to action with a 4-under 67 Thursday. He played alongside Nick Watney, a co-runner-up with Snedeker last week in San Diego, who joined the large group at 6 under following the opening round.

Low scores were a theme of the day, as 103 players in the 132-man field were at or below par when play was called for the day. Among the few to struggle at TPC Scottsdale were former U.S. Open winner Geoff Ogilvy, who opened with a round of 3-over 74, and fellow major winner Martin Kaymer, who joined Ogilvy at 3 over with two holes still remaining in his opening round.

Following two days of scrutiny regarding his reported use of deer antler spray, Vijay Singh withdrew early Thursday morning from the event, citing back soreness. He was replaced in the field by Richard H. Lee, who took full advantage of the opportunity by firing a 3-under 68 in the opening round.