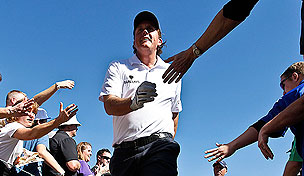 A day after coming agonizingly close to golf's magic number, Phil Mickelson kept his foot firmly on the gas pedal – until the final hole.

Overcoming a slow start to his round, Mickelson carded six birdies and an eagle before a double bogey on the 18th hole, settling for a 6-under 65 that kept his lead at four shots after 36 holes at TPC Scottsdale.

Teeing off late in the afternoon wave, Mickelson had company atop the leaderboard by the time he started his round, and actually trailed Keegan Bradley briefly after beginning with six straight pars. A birdie on the seventh opened the floodgates though, as Mickelson played his next 11 holes in 8 under.

Needing a par on the 18th hole to set the PGA Tour's all-time 36-hole scoring record at 123, Mickelson instead found the water with a 3-wood off the tee. After a drop, his approach to the par-4 spun back short of the green, and Lefty was unable to get up and down for bogey. His 125 total matches the lowest 36-hole mark at this event, set in 2001 by Mark Calcavecchia en route to victory.

'It's disappointing to finish both rounds the way I did, but I've been playing well and I'm having a lot of fun around this golf course,' he noted after the round. 'It's going to be an interesting weekend because a lot can happen, and usually does here.'

Mickelson leads by four over Bill Haas, who bettered his opening 6-under 65 by one shot Friday and stands at 13 under after two days. Bradley is one shot further back in third place after matching the day's low round with an 8-under 63, meaning the top three spots at the halfway point in Phoenix are comprised of the three members of last year's playoff at the Northern Trust Open, won by Haas. Bradley was joined at 12 under late in the day by reigning FedEx Cup champion Brandt Snedeker, who birdied his final hole for a 5-under 66 Friday.

With low scores abundant at TPC Scottsdale, the 36-hole cut fell at 4-under 138. Among those failing to make the weekend were Mickelson's playing partners, Jason Dufner and Rickie Fowler, who both finished at 3 under. Former European Ryder Cup stars Nicolas Colsaerts (2 under) and Martin Kaymer (Even) were also unable to make the cut.