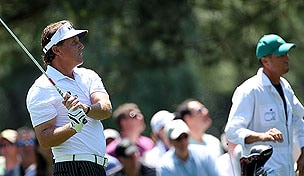 Getty Images
AUGUSTA, GA - APRIL 07: Phil Mickelson of the United States hits a shot from the first tee during the third round of the 2012 Masters Tournament at Augusta National Golf Club on April 7, 2012 in Augusta, Georgia. (Photo by Jamie Squire/Getty Images)  -

DORAL, Fla. – Following a two-week break, Phil Mickelson returned to center stage this week at the WGC-Cadillac Championship, although he has had plenty of competition the last two days to prepare him for the year’s second WGC.

On Tuesday Mickelson and Keegan Bradley flew to Georgia for a practice round at Augusta National and got a preview of the slightly adjusted 14th green. Lefty said the club has added a “backstop” in the back left portion of the putting surface, which he said could add to the excitement of the hole.

“It’s very possible that you might see more hole-outs to that pin position,” Mickelson said. “If you go long, though, I don’t think you can get it close because the pitch from back to front now is more severe on those last 4 feet.”

As for the state of his game, Mickelson said he was “a little unsure” what to expect this week, a question of rust combined with Wednesday’s winds and a tough four-ball match. Mickelson and Bradley teamed to play Dustin Johnson and Thorbjørn Olesen, who – according to one observer – combined to birdie the last three holes to win the match.

Good news for Lefty, word is a day earlier at Augusta National he got the best of Bradley in an impromptu match. When it comes to Augusta National, experience goes a long way.