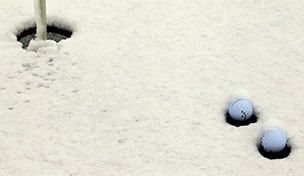 MARANA, Ariz. – There is a reason why the PGA Tour clings to the warmer climes this time of year and that reality came raining down Wednesday at Dove Mountain in the form of 1 ½ inches of snow that well, froze out Round 1 play at the WGC-Accenture Match Play Championship.

White-outs like this are so rare that in 19 years on Tour Jim Furyk couldn’t remember a similar delay. In fact the veteran had to go all the way back to a high school tournament in 1984 to recall the last time it happened.

“There is a reason we don’t play in the cold weather,” said Furyk, who was all square with Ryan Moore through six holes when play was suspended. “Follow the sun, is that it?”

Even Zach Johnson, who was 6 down to Jason Day through 10 holes and grew up in Iowa, said he’d never seen anything like Wednesday’s weather.

“I’ve played in the cold but never like this,” Johnson said.

“I’ve played in worse than this, but this was wet,” Bradley said. “(The suspension) was the right decision; it was getting silly out there.”

Predictably, the large European contingent seemed unfazed by the snow. Ian Poulter was spotted roaming the grounds and tweeting photos of the surreal scene. When asked if this was just a normal day back home in England he joked (at least we think it was a joke), “Oh yeah, tee it up.”

Not sure Thailand’s Thongchai Jaidee, who is 2 down to Sergio Garcia through 15 holes, would agree.