Players forced to get creative during lengthy delays 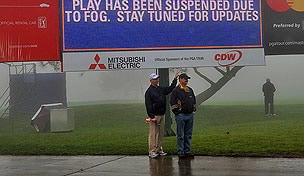 SAN DIEGO - On one side of the putting green, Nicolas Colsaerts focused on making a series of 3-foot putts using only his left hand. On the other side, a handful of die-hard fans were enthralled by a putting contest between Colt Knost, John Mallinger and Charley Hoffman.

On a day where most players spent the whole day at the golf course without hitting a meaningful shot, many were forced to get creative to kill the time.

'You catch up with some guys you haven't seen in a while. You do a lot of storytelling,' explained Brandt Snedeker, who got to the course for a 7:30 a.m. tee time Saturday but never made it to the first tee. 'You don't want to think too much about the golf course right now. You just want to have fun and keep your mind fresh.'

With play getting briefly underway around 10:30 a.m. - and appearing set to resume around 12:30 p.m. before conditions quickly worsened - many players warmed up multiple times throughout the day, expecting to get their third round underway on more than one occasion.

'It's tough when you prepare, and then it's one of those days where preparation is going to be kind of thrown off,' Snedeker added. 'I've warmed up three times already. I've putted for three hours, probably.'

While some worked on their swing for several hours hitting balls on the driving range, many players spent the afternoon circled around the putting green - one of the few places at Torrey Pines where they could hit their ball Saturday and still see it land.