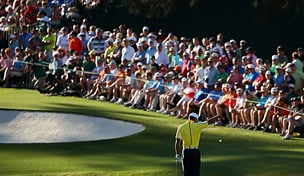 Social media was buzzing Saturday morning with the news that Tiger Woods had been assessed a two-shot penalty for an illegal drop on the 15th hole during the second round. Here is a sample of some of the reactions from players:

I think he should WD. He took a drop to gain an advantage.

It is all about the player and the integrity of the game. Woods violated the rules as he played #1 carries a greater burden. WD for the game

Two shot penalty official. I like this ruling because he took an illegal drop but no official brought it to his attn.

Take the fact that it was Tiger out of the equation and it is a fair ruling. Since it is him the debate begins about TV ratings etc etc.

If I tell a rules official I wanted 2 more yards, I'm on my way to Dairy Queen for a blizzard.

This is a joke. In my opinion anyone else would have been DQ'd. When you sign for the wrong score that's what's supposed to happen.

The last time I saw someone do what tiger did (meld two options and use line of flag and ball played) was in junior golf. Legitimately.

I understand this new rule now to be fair and it's a good thing, do u all remember what happened to Roey at the open, wouldn't happen now