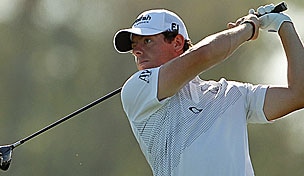 This week is the first of 2013 with two events on the fantasy golf slate. Our power rankings for the Humana Challenge can be seen here, while the European Tour also claims part of the spotlight with the Abu Dhabi HSBC Golf Championship. Many of the game's elite head to the United Arab Emirates to test their game against a strong field and hope begin the new season with a win.

Robert Rock is in the field to defend the title he won last year over Rory McIlroy, now the top-ranked player in the world. Here are 10 names to keep an eye on this week in the Middle East:

1. Rory McIlroy: The top of any list until proven otherwise. This may be his first week with new Nike clubs in the bag, but the Ulsterman has recorded top-5 finishes each year here since 2009, including two straight runner-up showings.

2. Tiger Woods: Rarely (ever?) has Woods been in the position of 'second fiddle,' as he potentially is this week to McIlroy. It would not be surprising to see a performance that helps assert his dominance over the game to begin the year.

3. Martin Kaymer: The top two players inclusive, Kaymer's record in Abu Dhabi is unparalleled. Despite a miss last year, the German won here three times from 2008-2011. The other year, 2009, he was second.

4. Justin Rose: Having ascended to fifth in the world, the Englishman carries into 2013 a lofty set of expectations. A strong showing this week could mark the start of a career-defining season.

5. Peter Hanson: The Swede had one of the more impressive seasons last year on the European Tour, winning twice and recording a top-5 finish on five other occasions. He has three top-11 results in Abu Dhabi, including a T-2 performance in 2007.

6. Anders Hansen: Perhaps unfamiliar to many American fans, the Dane has finished inside the top 18 each of the last four years at this event. Each of his last 19 competitive rounds at Abu Dhabi Golf Club have been at par or better.

7. Padraig Harrington: The Irishman experienced a bit of a resurgence last year, and has three top-11 finishes in five Abu Dhabi starts. Will he be inspired by countryman Paul McGinley's ascension to Ryder Cup captain?

8. Jason Dufner: Dufner is making his first trip to Abu Dhabi on the heels of a disappointing week at Kapalua, but the unflappable American has the all-around game to contend on just about any golf course.

9. Thorbjorn Olesen: A top-10 finish here last year helped spark a season that moved the Dane into the top 60 in the world ranking. He'll be looking for another strong showing to help firm up spots in the looming WGC events this spring.

10. Branden Grace: Grace missed the cut here last year, but a season that included four European Tour wins has moved him into another category of player. The South African is eager to show that 2012 was no fluke.