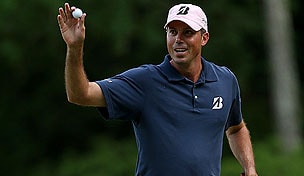 Getty Images
AUGUSTA, GA - APRIL 08: Matt Kuchar of the United States waves to fans during the final round of the 2012 Masters Tournament at Augusta National Golf Club on April 8, 2012 in Augusta, Georgia. (Photo by Andrew Redington/Getty Images)  -

The PGA Tour heads to the continental U.S. for the first time in 2013 this week with the Humana Challenge. The Palmer Course at PGA West will host the final round, but players will also tackle the Nicklaus Private Course and La Quinta Country Club for one round each.

Mark Wilson is in the field to defend the title he won last year over a trio of players in the event's second year under a 72-hole format. Here are 10 names to keep an eye on this week in California:

1. Matt Kuchar: The ideal mix of recent form and past performance. Kuchar began his year with a pair of top-10 finishes in Hawaii after nine such finishes in 2012, and he has been inside the top 25 at Humana each of the last four years, including a runner-up finish in 2010.

2. Bill Haas: Few in this week's field have more experience in this event than Haas, who has played each year since 2005. Though he struggled last year, he won here in 2010 and followed that result with a T-2 showing the following year, and overall Haas has five top-25 finishes in eight Humana starts.

3. Webb Simpson: Somewhat fitting his personality, Simpson has gotten off to a solid - if unspectacular - start to 2013 with a pair of top-20 finishes. He has finished inside the top 15 twice in three Humana starts, including a T-5 showing in 2009, and his consistent ball-striking should yield plenty of birdies this week.

4. Brandt Snedeker: Started strongly in Kapalua with a third-place finish, and the reigning FedEx Cup champion has a pair of top 10s here since 2010. Arguably the best putter in an event that will put a high priority on making putts early and often.

5. Bo Van Pelt: This week will be about making birdies, and few players did that better in 2012 than BVP. Making his 2013 debut, Van Pelt will hope to pick up where he left off in closing the 2012 season with four straight top-10 finishes.

6. Tim Clark: Did everything but win last week at Waialae, closing with a 63 Sunday to show that when healthy, he is a threat on courses that emphasize shot-making. Expect more of the same this week on a rotation that will not push the South African past his comfort zone in terms of length.

7. Robert Garrigus: A runner-up here last year - one of five such finishes last year on Tour - Garrigus will look for a repeat performance this week. While known for his length off the tee, he was also 11th on Tour last year in birdie average and tops in par-3 birdies.

8. Phil Mickelson: Twice a winner here (2002 & 2004), Mickelson will be making only his second start at La Quinta since 2007. With the game's top two players beginning their years in Abu Dhabi this week, Lefty will be motivated to steal the headlines - or at least some of them.

9. Ben Crane: Co-led after 36 holes last year along with eventual winner Mark Wilson before fading to T-8 over the weekend. Crane clearly has a feel for the greens in the California desert, finishing in the top 16 in the field in putts per round in five of his last eight Humana appearances.

10. John Senden: Another player with significant experience in this event, Senden is making his 12th appearance here, having recorded four top-10 finishes since 2005. Last year he led the field in fairways hit and was second in greens in regulation en route to a T-6 showing.