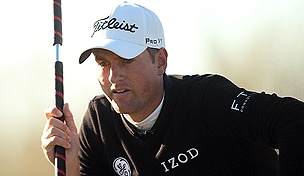 With the season's second WGC event in the books, the PGA Tour heads north for the third installment of the Florida Swing. The Copperhead Course at Innisbrook plays host to this week's Tampa Bay Championship presented by Everbank, where many of the game's best will look to hone their skills with the season's first major fast approaching.

Luke Donald returns to defend the title he won last year on the first hole of a dramatic four-way playoff. Here are 10 players to watch this week in Tampa:

1. Webb Simpson: The reigning U.S. Open champ has finished inside the top 15 each of the last three years in Tampa, including a runner-up showing in 2011. Five of his seven starts this year have yielded top-20 finishes, and Simpson is currently sixth on Tour in scrambling.

2. Sergio Garcia: The Spaniard is coming off a T-3 finish last week and has been inside the top 20 each of the last two years at Innisbrook. His early-season form has clearly carried over from Europe to the States, as Garcia is currently ninth on Tour in scoring average.

3. Adam Scott: Like Garcia, Scott finished in a tie for third at Doral, firing the lowest score of the week with a closing 64. The Aussie has notched top-10 finishes in both of his stroke-play starts this year and appears to be rounding into form as Augusta approaches.

4. Luke Donald: The defending champ returns still in search of his first top-10 finish of 2013, but his stellar short game makes him an ideal candidate at Innisbrook. The Englishman led the field last year in strokes gained putting en route to victory, and also finished T-6 here in 2010.

5. Matt Kuchar: Kuchar was unable to get going last week at Doral but has still been one of the more consistent players thus far in 2013. Top-12 finishes in each of his last two Tampa starts, including a tie for 10th last year, make him a player to watch this week.

6. Jason Dufner: Having picked up some momentum with a T-12 finish at Doral, Dufner heads to Tampa where he has finished inside the top 30 each of the last four years. That includes a tie for 10th last year, when he led the field by two shots after 36 holes before fading over the weekend.

7. Jim Furyk: A winner here in 2010, Furyk was also among the playoff participants a year ago. Despite a pedantic finish at Doral, the former U.S. Open champ is currently fifth in driving accuracy, which should help him navigate the tree-lined fairways at Innisbrook.

8. Michael Thompson: Followed his maiden win at Honda with a solid T-8 finish at Doral. Thompson certainly has momentum on his side, and now returns to an event where he finished T-16 a year ago.

9. Retief Goosen: A two-time winner of this event (2003 & 2009), Goosen also finished fifth in 2010 and tied for 20th last year. Though he has yet to replicate the form that netted a top-10 finish at Pebble Beach last month, the South African clearly feels comfortable on the Copperhead Course.

10. Geoff Ogilvy: Two weeks after a runner-up finish at Honda, Ogilvy heads to Tampa where he has been inside the top 30 six of the last seven times he's teed it up, dating back to 2003. An all-Aussie pairing with Scott and Jason Day for the first two rounds should help make the first 36 holes especially comfortable.