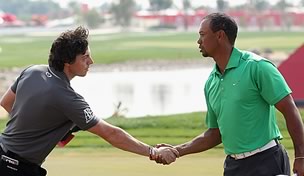 Forget New Year's resolutions. How about one wish for 2013? In this Punch Shot, GolfChannel.com writers weigh in with what they want most - golf related - in the new year.

Rory McIlroy vs. Tiger Woods in a final-round, head-to-head duel in a major.

That's my one wish for tournament golf in 2013.

Should a full-fledged rivalry emerge between these two talents this year, the game's electrified in a fresh way. I asked Jack Nicklaus at the Father-Son Challenge a couple weeks ago if he thought this kind of rivalry would be good or bad for Tiger, if it would give Tiger a boost, or if it would make Tiger's path harder. Nicklaus was emphatic that it would be good for Tiger, that it would give him helpful motivation beyond breaking Nicklaus' record for major championship triumphs.

We've learned that what's good for Tiger is usually good for the overall health of the game. A meaningful rivalry will be good for the game.

Like most diets and resolutions of all sorts this New Year’s wish will likely lose some steam before the big payoff, but for sheer parity we’d like to see an International victory at October’s Presidents Cup.

If not a triumph then at least a shootout at Muirfield Village, a close bout to help wrest the event out of the lopsided doldrums it has drifted into since the last outright victory for the Rest of the World squad.

The International side is now 15 years removed from its last victory and has lost five of the last six biennial matches by an average of 5 ½ points. You may enjoy the event, the camaraderie and Fred Couples, but without a little parity the Presidents Cup is in danger of lapsing into irrelevancy.

Every two years the Presidents Cup begins with plenty of promise. In 2011 it was International captain Greg Norman leading a group on home soil at Royal Melbourne that was, at least according to the world golf ranking arithmetic, the favored side.

The International squad fell behind on Day 1, dropping four of the first six foursomes matches, and never recovered. The slow start drained the energy from the home crowd, if not the 12 internationals.

Our 2013 wish would be for a close match, regardless of outcome, or maybe just a fast start for the International team.

My one golf wish for 2013 is the ability to bomb 330-yard drives, hit towering iron shots that land softly on the green and roll in putts from everywhere – even one-handed and behind my back, Ty Webb style.

OK, so maybe that’s three wishes. But I need 'em all.

As far as the professional ranks are concerned, give me the same thing I always wish for: rivalries.

Is that too much to ask?

Hey, I won’t be too greedy. I’ll settle for just a few of those. Or feel free to mix and match. Phil against Ernie? Sign me up. Rory and Lee? Love it. Tiger and Bubba? Awesome.

Don’t get me wrong. I love a Cinderella story outta nowhere as much as anybody, but in a superstar-driven game, the big names bring more eyeballs to events and get more of us talking around the proverbial watercooler. With more parity at the elite level in recent years, traditional rivals are becoming more obsolete than ever. Let’s hope we see a few more blossom in 2013.

My wish: for the PGA Tour to enact its own rule and ban the anchored stroke in October, at the start of the 2013-14 season.

There is no place in our game for what happened at the World Challenge, where Keegan Bradley was jeered by a numbskull fan for anchoring a putter in his belly. Legally.

Sadly, we could see more of the same if the proposed rule is not enforced until 2016, when the next edition of the Rules of Golf is published.

The governing bodies may say differently, but this new rule puts players such as Bradley and Webb Simpson in professional limbo, their accomplishments viewed with an asterisk because they used a technique that will soon be illegal.

The PGA Tour should bypass the potential headache and create its own rule: No anchoring, beginning in October 2013.