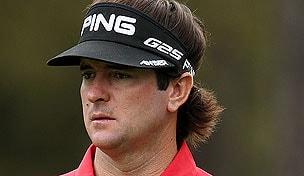 Getty Images
SHENZHEN, CHINA - NOVEMBER 26: Brandt Snedeker of USA plays his tee shot during the pro - am of the Omega Mission Hills World Cup at the Mission Hills Resort on 26 November 2008 in Shenzhen, China. (Photo by Stuart Franklin/Getty Images)  -

AUGUSTA, Ga. – Bubba Watson jokingly said earlier this week that his goal for this Masters was to make the cut. As the defending champion he didn’t want to sit around all weekend before presenting the new champion with the green jacket late on Sunday.

After an opening-round 75, Watson has some work to do.

Most surprising was that a man with Watson’s firepower made only one birdie. He also made four bogeys and repeatedly struggled with the putter in his hands.

“I hit the ball really well, I can’t complain about my ball-striking,” Watson said. “I had four three-putts. Well, it’s really three three-putts and one was on the fringe.

Watson was tied for 70th place when he finished, a position that will likely improve by the end of the day. But with the top 50 players and ties qualifying for the weekend, Watson is going to have to play well to prolong his title defense.