Putting is key at Augusta National 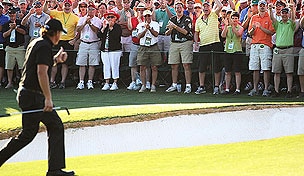 AUGUSTA, Ga. – If the U.S. Open is a survival test, the British Open a question of attrition and the PGA Championship “Glory’s Last Shot,” the Masters is, by every measure, the putting contest.

You may remember Bubba Watson’s twisting save from the forest right of the 10th fairway in the playoff last year, or maybe Tiger Woods’ tectonic chip-in on the 16th hole in 2005, but it is putting that ultimately decides who walks away on Sunday with a green jacket.

No one ever credits their ball-striking or driving in their acceptance speech. Putting one’s self in the right position helps, but inevitably the winner will have made, if not the most putts, the most crucial putts.

Just two players in the last decade of Masters champions have ranked outside the top 16 in putting for the week (Watson in 2012, T-37, and Phil Mickelson in 2004, T-23), and victories like Charl Schwartzel’s in 2011 – when he one-putted his last four greens – are textbook examples of what it takes to win at Augusta National.

The Golf Fix: How to putt at Augusta National

Like everything else at Augusta National – cell phones, running, Dufnering – there are hard-and-fast rules when it comes to putting at the former fruit nursery. In simplest terms, anything from above the hole is roadkill territory, but that doesn’t help when every green features a diabolical collection of humps and bumps.

“Almost every hole there’s putts that you don’t want,” said Steve Stricker, one of the game’s best putters whose pedestrian record at the Masters (one top 10 and five missed cuts in 12 starts) is one of the game’s great mysteries. “Like on No. 1, they are going to have a pin up there on the front left over the bunker there somewhere and if you hit it long, it’s a very difficult putt.”

For some, like Stricker, putting at Augusta National is akin to a prevent defense. Forget birdie chances, just give yourself a chance to two-putt, which in some ways makes the year’s first major a lag-putting championship.

“It’s all about putting it in the right spot on the greens to give yourself a putt where you can two-putt and get out of there,” Stricker said.

Urban legend would suggest that anything downhill should be avoided, like putts form the back of the eighth green, for example, that stop only when they drop into the hole or the nearest bunker – whichever comes first. But veterans will tell you that ease is a function of familiarity, not pace.

Consider Dave Stockton Sr., a 12-time Masters participant who has evolved into the game’s preeminent putting guru, who will tell you Augusta National is not the most difficult place to putt, just the most exacting.

“The greens are fairly easy to read; the hardest courses to putt on are flat courses like in Florida,” said Stockton, who finished tied for second at the 1974 Masters. “Putting here is great because you don’t have to worry about speed. They are all going to be fast.”

Stockton ranked any putt on the par-4 fifth green the most difficult on the course and added that anything from behind the pin at No. 4 should be avoided.

It doesn’t help that officials at Augusta National have made a hobby out of tinkering with the venerable club’s putting surfaces. Consider it the club’s version of “Where’s Waldo,” with players annually trying to figure out where the needle in the stack of needles is hidden.

“You honestly wouldn't even notice it, if you had not had years of knowing that green,” said Phil Mickelson, who made a pre-Masters scouting trip to Augusta National last month.

“That little low section to the left, behind it, there's a backstop now whereas before, it would take the ball directly to the right behind the hole 12 feet. Now, it's pitched a little bit more back where it will bring it back to the hole.”

Ben Crenshaw, a renowned architect who has been playing the Masters since 1972, has become a student of Augusta National and its ever-evolving greens.

“It’s amazing how right they get it every year and fascinating to watch,” Crenshaw said moments after his practice round on Monday with 14-year-old amateur Tianlang Guan, who is playing his first Masters.

Guan arranged the practice round so he could pick Crenshaw’s brain on the subtle nuances of the course. And what did they spend their day talking about?

“The greens, of course,” Crenshaw smiled.

What else at the game’s ultimate putting contest?