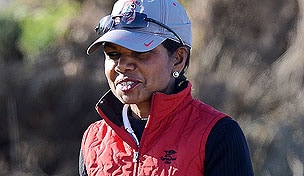 ''Somebody asked me, 'How did it compare to diplomacy?' And I said, 'Well, I know how to do diplomacy, I'm not so sure about the golf course.''' – Condoleezza Rice, former Secretary of State, after the opening round of the AT&T Pebble Beach National Pro-Am. Rice started hot but became clearly rattled after she hit a woman in the head on an errant approach shot on the sixth hole.

'It’s a lot of fun to see these guys in their element. I’ve played in celebrity tour events before where it’s all just a bunch of hacks out there, but this is fun just watching these guys in their element seeing what they’re doing and just trying to not get in their way.' – Green Bay Packers quarterback and 2011 NFL MVP Aaron Rodgers, enjoying his time playing with PGA Tour talent at the AT&T Pebble Beach National Pro-Am.

'It’s totally different you get out here and the ball's just sitting still. It seems so easy but it’s not, especially when you got people watching and you’re a little out of your element and the nerves get to you.' – Detroit Tigers starting pitcher and 2011 AL Cy Young Award winner Justin Verlander, on the pressure of playing in front of a gallery at the AT&T Pebble Beach Pro-Am.

'I want to talk to Fred (Couples) and Bernhard (Langer) and size up if they are going to find another way (to putt) or whether they are going to pack up their tents and go home.' – John Cook, one of four player directors on the Champions Tour Policy Board, on what impact the possible ban could have on the senior tour’s bottom line since some of the most marketable stars, including Fred Couples and Bernhard Langer use the anchored stroke.

'I would certainly try (to putt) another way. It depends on what happens and we’re still in the question phase, but if I don’t enjoy the game anymore than I would stop playing.' – Langer’s response on being forced to switch back to a traditional putting stroke because of the anchor ban.

'In terms of what we did, it will probably impact his snowboarding more than his golf swing. I suspect he will probably be able to swing even better when he’s fully recovered.' – Dr. Regis Haid, Jr., on the spinal-fusion procedure and bone spurs surgery he performed on Davis Love III. Love is reportedly doing well and recovery is expected to take from six to eight weeks.

'It's not a hundred guys playing slow; it's a few guys. I know that I don't want to be one of those guys. I want to play fast ... There's a handful of guys, and unless those guys make a change, it's just going to be slow.' – Hunter Mahan, on the issue of slow play on the PGA Tour. Mahan mentioned giving players strokes and taking away FedEx Cup points as possible solutions.

'Your body produces IGF-1 every day, it’s in food – meat and milk. You cannot ban a natural occurring substance.' – Mitch Ross, founder of S.W.A.T.S., the company that produces the deer-antler spray which has landed Vijay Singh in hot water. The PGA Tour’s list of banned substances is filled with naturally occurring items including IGF-1 and testosterone.

'I made myself stay there and watch because I wanted to remember that. I wanted to remember what it felt like. With everything that happened that week, we probably still should have won.' – Stacy Lewis, on watching the Europeans celebrate after their stunning come-from-behind 15-13 victory at the Solheim Cup almost 18 months ago.

'I remember sitting there watching and thinking, 'Is this really happening?' It was a terrible feeling. I had never been on a team that lost.' – Paula Creamer, echoing her teammate Lewis’ feelings on the American’s Solheim Cup disappointing loss. The biennial event will next be played Aug. 16-18 at Colorado Golf Club outside Denver.