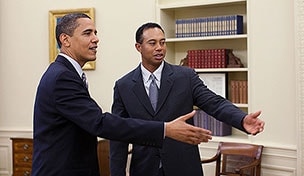 'He called and said, 'Hey Tiger, want to play a round of golf?' No, it was much more involved than that. It was an invitation you don’t turn down.' – Tiger Woods, joking about how a round of golf was arranged with President Barack Obama last weekend at The Floridian in Palm City, Fla. Woods partnered with the president against U.S. Trade Representative Ron Kirk and Floridian owner Jim Crane and added, 'We won.'

'I’m so sad.' – Ariya Jutanugarn, 17, after making a triple-bogey on the 72nd hole to lose to Inbee Park by a shot at the Honda LPGA Thailand.

'I tweeted right from when I heard the news, that this is dangerous. People say, 'Well he's so darned good, he can compensate.' But I don't feel when you've climbed that wonderful climb to world No. 1 that you should be compensating and trying to find a way for this equipment to fit you.' – Nick Faldo, on Rory McIlroy’s slow start to the season after switching to Nike equipment. McIlroy lost in the opening round of this week’s WGC Accenture -Match Play Championship after missing the cut in his first start of 2013 in Abu Dhabi.

'I went through the same thing. I decided to switch (equipment) and I switched everything. And I mean, I was like a fish out of water, I was gasping for air.' – Johnny Miller, comparing his own struggles to McIlroy's dreadful start this year.

'You go back in history and it's called a golf swing, not a golf hinge. I would like us to stick with the true traditions of the game, because it's called a golf swing and that is part of the uniqueness and the skill of this game.' – Faldo, again, offering support for a proposed ban on the anchored putting stroke. Reports circulated Friday that the PGA Tour is planning to formally oppose the ban.

'I was the first guy to win with a putter up the arm, which is going to be legal if they keep it the way it is now. I did feel like it was not in the spirit of the game. I felt like I probably shouldn't have been doing it even though it was legal.' – Miller, again, echoing Faldo’s comments in support of the anchor ban.

'I promise you, nobody quits golf because two different sets of rules govern it. But lots of people will come to the game because they are allowed to play with equipment that makes it more fun.' – Brandel Chamblee, noting that bifurcation could boost a game whose overall growth remains stagnant.

'Well, there’s a bunch of yummy chocolates in (the locker room) and you just sit there and eat chocolates and drink a lot of Coca-Cola.' – Jason Day, on how he passed the time during the snow delay Wednesday at the WGC-Accenture Match Play Championship. Players have gotten a lot of practice at waiting out odd weather this season, already having faced wind, fog and snow delays in 2013.

''There was a guy building a snowman this morning at 8, and they said they were going off at 10:30. I figured it was going to be awhile'' – Russell Henley, on an additional delay Thursday morning at Dove Mountain because of nearly 2 inches of snow that fell Wednesday.

'Right now as far as ball-striking is concerned, I don't see how it gets any better than Tiger. I think he's going to win the Masters and the (British) Open. I'm picking him for the Open because he's not going to need a driver there and that's where he has some problems.' – Trevino, again, assessing the state of Woods’ game and his outlook for the season.