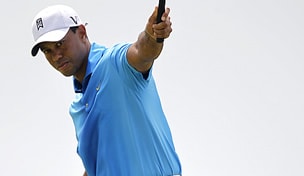 'Tiger Woods demands $3 million just for an appearance if he were to compete in the Commercial Bank Qatar Masters, which is not worth paying for a tournament of $2.5 million prize money.' – President of the Qatar Golf Association, Hassan Al Nuaimi, being quite frank about Tiger Woods' asking price to appear at the Qatar Masters.

'As much as I would dearly love to captain, this may not be my time. I won one of the biggest prizes in golf by winning the Open and I am exempt for another three years (on the PGA Tour). If I was given the opportunity to do the captaincy I'd effectively be throwing two of those years away.' – Darren Clarke, on the possibility of being asked to captain the European team at the Ryder Cup in 2014.

''I've been nagging my wife for a few years that I want something on the farm as there are a few stumps and things I need to get rid of. And that's why I stood over that putt on 18 for a bit longer than normal. So I'm going to play around with it and might dig out a few bunkers.'' – Louis Oosthuizen, after winning a pro-am event in South Africa that awarded a car to the winners. However, the farming enthusiast talked to organizers and swapped the car for an excavator, which happened to be the prize for anyone who made a hole-in-one at the 15th.

'I've got a guy who moved out west. I’m like, 'What are you doing for a living?' 'I'm working at a ski resort.' 'I'm like, 'What do you do there?' 'I just put all the extra rented equipment up when they get done.' 'I'm thinking, I could never see myself doing that. It makes me definitely appreciate what I’m doing a lot more.'' – Rookie Russell Henley, on his dream job as a PGA Tour pro. Henley started his career on the right track co-leading the Sony Open through the first three days of play.

'Come on in! Have a hot dog!' – Ira Helfer, the Hot Dog King of Chicago, famous around Waialae Country Club for opening his backyard (just 150 yards off the first tee) to everyone during the Sony Open and serving up his delicious hot dogs. He's even entertained the governor of Hawaii and President Clinton. When asked if the president had a hot dog he responded, 'No ... he had two.'

'If they do, they don’t get a hot dog. He’s like the Soup Nazi.' – Paul Shinkawa, longtime friend of Helfer, on the Hot Dog King of Chicago's one ordering faux pas, ketchup.

'I don’t know who you’re talking about.' – Dustin Johnson with a big smile across his face, following his victory at the Hyundai Tournament of Champions, when asked about his lady friend that was spotted following him around the course during the week. His friend was none other than Paulina Gretzky, daughter of The Great One, Wayne Gretzky. She attended this week's Sony Open as well.

'TrackMan is the greatest teaching tool ever. If you’re not using it in 2013 you’re behind the eight ball. New drivers are made with science, not art.' – Sean Foley on the increasingly popular Trackman technology being used on Tour. Foley uses it with his players, a list that includes world No. 3 Tiger Woods, Justin Rose and Hunter Mahan.