Goosen: Putters should be no longer than 40 inches 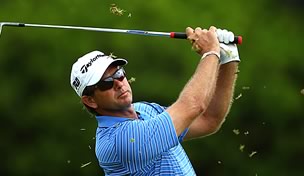 As the PGA Tour grapples with how to address anchoring, one player explained Wednesday why the governing bodies didn’t go far enough with the potential ban.

Retief Goosen told reporters at the AT&T Pebble Beach National Pro-Am that he was a “little bit disappointed” with the rule to ban anchoring the club to a part of the body, and that it was simply a reaction to the belly-putterers who experienced success on a major stage.

“I feel that the rule was a little bit – I won’t say discriminating – but it’s just three guys with the belly putters who won majors, and the other guys using long putters, their putters (weren't) banned,” Goosen said.

The proposed rule does not outlaw the belly or long putter, just the anchoring of the club to a part of the body. A putting stroke such as the one used by Matt Kuchar, with the putter shaft running up the left forearm, is permitted.

Goosen, 44, who last fall underwent back surgery, has returned to the conventional putter with a potential ban on the anchored stroke looming. The PGA Tour will decide later this year whether to adopt the ban or create its own rule.

The two-time U.S. Open champion also thinks the ban should have been moved up from 2016 because players will create a new way to putt with the longer-than-standard-length flatstick.

“I think this should’ve just been long putters out,” Goosen said. “You must hold it in the hands the way it should be, and just make the maximum length for putters 40 inches.”