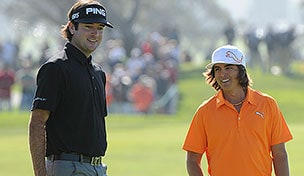 Getty Images
SHIMA, JAPAN - NOVEMBER 06: Asako Fujimoto of Japan plays a shot on the 2nd hole during round two of the Mizuno Classic at Kintetsu Kashikojima Country Club on November 6, 2010 in Shima, Japan. (Photo by Chung Sung-Jun/Getty Images)  -

ORLANDO, Fla. – Half the Golf Boys team will visit Augusta National to do some Masters preparation next week.

Defending champion Bubba Watson and Rickie Fowler will fly together to Augusta to play Wednesday and Thursday, but they probably won’t be playing the course together the first day. Watson is taking his manager, Jens Beck, and his tax accountant, Randall Wells, to play with them as a show of gratitude.

“I just feel like I should do something nice for those two,” Watson said.

Fowler hung around at the end of the Masters last year to support his friend, Watson. He hoofed around with the gallery watching Watson defeat Louis Oosthuizen in a playoff. Fowler was behind the 10th green when Watson hit that magical hook to escape the trees and set up his victory.

Fowler said he was inspired watching the playoff and green jacket ceremony. Fowler tied for 38th in his first Masters appearance two years ago. He tied for 27th last year.

“Seeing Bubba there last year in the playoff, feeling a fraction of the emotions he did, to see that and be there for it and for the green jacket ceremony, it definitely gives me a kick in the butt,” Fowler said.