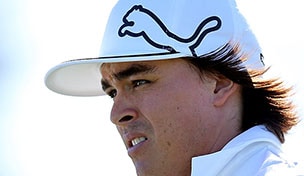 Fowler, 24, impressed Rose with his racing skills Tuesday at the Palm Beach International Raceway, where they took part in a Ferrari racing experience just down the road from the Honda Classic, this week’s PGA Tour stop.

“You can tell that kid has racing in his blood,” Rose said. “He showed up with his own helmet.”

Actually, Fowler has his own fleet of fast cars, too, though he wasn’t racing any of them this week. He has a Porsche GT3-RS, a Mitsubishi Evo and a Nissan GT-R. Fowler grew up racing motocross, and he hasn’t lost his need for speed. He regularly takes a car out to the Palm Beach track to hone his skills.

“He’s awesome,” Rose said. “I learned a little bit about what racing’s all about from him.”

It’s a good thing Ian Poulter didn’t arrive until Fowler was leaving. The track officials weren’t keeping lap times, but they would have had a hard time keeping Poulter and Fowler from wanting to see who’s faster. Poulter’s also quite the racing enthusiast with his own collection of cars.

“The guys were itching to put up times, but it’s a good thing they weren’t doing that,” Rose said. “As competitive as we all are . . . The name of the game was to keep from putting a Ferrari into a wall and injuring ourselves.”

The racing theme spilled into Wednesday’s Honda Classic pro-am. Fowler was paired with Graham Rahal, the IndyCar driver and son of Bobby Rahal, winner of the ’86 Indianapolis 500.

“We talked racing the whole way around,” Graham said.

Fowler’s need for speed was evident in how quickly he got himself on to the Tour. After foregoing his final two years at Oklahoma State, Fowler turned pro in the fall of ’09. He tied for seventh in his first Tour event as a pro, and he lost his second start in a playoff. Fowler blew through Q-School that winter to get his Tour card. He didn’t back off the gas as a rookie, finishing 22nd on the money list and at 21, became the youngest American to make a Ryder Cup team.

The problem with that fast start is that it escalated expectations.

As good as Fowler was his first two seasons, he didn’t win.

“I think Rickie’s two biggest strengths are, one, he can pull the trigger on shots without fear of consequence,” said Joe Skovron, Fowler’s caddie. “He just isn’t afraid of failure. The other is that he’s able to move on fast [when things don’t work out]. I think when you’ve grown up in motocross, where you can break an arm, or break your neck, it definitely translates to no fear of consequences in golf.”

Fowler found his winning gear last year, breaking through to win the Wells Fargo Championship in the spring.

“Because of his high profile, because of how close he had come to winning, it was huge in that it got the whole question of when he was going to win out of the way,” Skovron said.

Fowler had a terrific run last spring. He tied for 10th at the Zurich Classic, claimed the Wells Fargo the following week, finished second the week after that at The Players Championship and then tied for fifth at Colonial in his next start after that.

Though Fowler looked set up to make another Ryder Cup team, he lost all his momentum in the summer, a fall off that was later explained by a back injury that Fowler had kept to himself. He played through irritating inflammation in his lower back until the pain in October forced him to withdraw from the Korean Open and the CIMB Asia Pacific.

“I’m still working on my back, still trying to get it 100 percent, but I’m swinging it really well,” Fowler said after his pro-am round Wednesday. “I’ve had a couple good finishes this year, and I’m really looking forward to the Florida swing.”

Fowler opened this season tying for sixth at the Hyundai Tournament of Championship and tying for sixth at the Farmers Insurance Open. There is some good mojo this week. After missing the cut in his first two Honda Classics, he tied for seventh here last year. It’s a home game for him. He moved to Jupiter two years ago and lives 15 minutes from the course. A regular at Medalist and the Bear’s Club, Fowler plays games with fellow South Floridians Dustin Johnson and Keegan Bradley, and occasionally even Tiger Woods. With Rory McIlroy moving to Palm Beach Gardens this winter, Fowler will be looking to set up a game with him, too.

“It’s good for all of us to be able to feed off each other, to have games when we’re home, whether it’s a best ball or skins,” Fowler said.

Fowler would like to claim backyard bragging rights with his second Tour title this week.