Fowler: 'That's the best I felt in the final group' 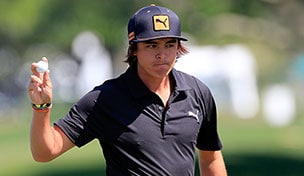 The last time Fowler was paired with Tiger Woods in the final round of a PGA Tour event was at last year’s Memorial. Woods won, Fowler shot the aforementioned score and was never a factor.

But Monday at Bay Hill, Fowler plodded along nicely well into the final nine holes and pulled to within two shots at one point. A key unforced error came when Fowler made bogey on the par-4 15th hole with a chance to pull within a shot. Instead, Fowler and Woods matched bogeys on the hole and Woods stayed up by two.

“I was swinging it well, I made a few putts and trying to put a little pressure on him, let him know I was there,” Fowler said. “Just would like to have that 7-iron back on 16. Just kind of a touch heavy. So unfortunate to make that swing at the time.”

Fowler made par on the last two holes to shoot 73 and tied for third place with Mark Wilson, Keegan Bradley and Gonzalo Fernandez-Castano.

“I felt really comfortable out there,” Fowler said. “That’s the best I felt in the final group.”