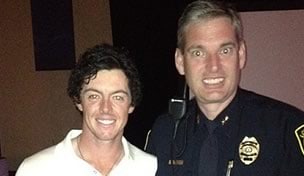 The police car that played a pivotal role in helping Team Europe claim the Ryder Cup last year at Medinah is now available to the highest bidder.

In danger of missing the tee time for his singles match against Keegan Bradley last September, then-world No. 1 Rory McIlroy used a police escort to race to the course, arriving at the first tee with just minutes to spare. The Ulsterman went on to defeat Bradley, 2 and 1, as Europe completed a stunning final-day comeback to retain the trophy.

The car, which belongs to the village of Lombard, Ill., was already slated for replacement and rumored to be on the verge of auction late last year.

The auction for the car, a 2005 Ford Crown Victoria reportedly with 88,900 miles, is set to conclude Monday, April 8.

'You are bidding on the unmarked Village of Lombard police car that was used to rush pro golfer Rory McIlroy to the Ryder Cup,' the ad's description reads in part. 'Don't miss this opportunity to own a piece of sports history, not to mention a darn fine automobile.'

As of this writing, the highest bid is only $1,775 – though the reserve price has not yet been met.