Round 1 predictions for the WGC-Accenture Match Play 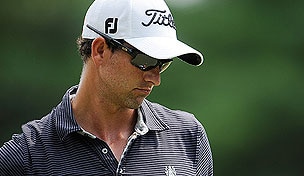 MARANA, Ariz. – Round 1 of the WGC-Accenture Match Play Championship gets underway Wednesday at The Ritz Carlton Golf Club Dove Mountain.

GolfChannel.com offers up some first-round predictions. Click here to play Golf Channel's Bracket Challenge to make your picks. (Also check out the bracket and tee times.) All tee times are local (MT).

Although El Nino has a history of one-and-done weeks at the Match Play - he’s been bounced in the opening set four times in 10 appearances - he has not finished outside the top 20 since last September.

In three Match Play starts Kuchar has never lost in Round 1, although he did struggle after a stellar start last week in Los Angeles. That Fujita is making his first start of 2013 also makes a Round 1 upset unlikely.

OK, so the wild-eyed Englishman has won this event before (2010) and is still riding high following last year’s Ryder Cup, but Gallacher is fresh off a victory in Dubai and is ripe for pulling an upset.

On paper this is an upset, but the truth is this is an extremely close match up but the Aussie, who advanced to the Sweet 16 last year at Dove Mountain, comes out ahead.

Tough opening-day pull for the Sony Open champion, who will face an on-form Schwartzel (T-3 at Northern Trust Open) who has never lost in Round 1 at the Match Play.

This is a “courses for horses” deal. Since the Match Play moved to Dove Mountain in 2007 Johnson has never advanced past the second round on a bomber’s course that is made to order for Day.

After Brandt Snedeker, who is missing this week’s WGC with an ailing rib, the South African is the game’s hottest player, having finished first, second and T-7 in his last three starts.

The defending champion has slowly dug himself out of the slump that beset him last year. Don’t be surprised to see him hanging around deep into the weekend.

Englishman already has one WGC on his shelf (WGC-Cadillac Championship) and is probably coach Sean Foley’s best chance to claim a second consecutive Match Play title.

The Muscles from Brussels has been sluggish in his American debut this season and Haas hasn’t finished outside the top 10 in his last three starts.

In a battle of long putters, the South African is poised to mar more than a few brackets. Don’t be surprised, this is the same player who has “upset” Vijay Singh, Retief Goosen, Martin Kaymer and Tiger Woods in his last two Match Play starts.

It is pronounced TOR-be-yorn OO-les-en and American fans should get used to saying it. The Dane is on a steady rise having finished T-2 in Abu Dhabi and T-3 in Dubai last month.

Bubba wins the battle of the bombers on Day 1, but this one will be close and may go extra holes. May we suggest they play the drivable par-4 16th hole until a champion in crowned for our viewing pleasure.

Tough match to call, but the nod goes to Furyk based on his experience at this event. The veteran has made a cool dozen starts at the Match Play in his career.

The Englishman has been steady, if not spectacular, to start the season and he did advance to the semifinals here last year. The Spaniard, on the other hand, went down in Round 1 in 2012 to Jason Day.

Two years ago the German took over the top spot in the World Ranking at Dove Mountain but he still seems to be searching for answers. Coetzee, however, is fresh off three consecutive top-10 finishes.

Still no top-10s this season for Bradley, but when it comes to holing clutch putts, fewer on Tour are better.

Potential upset here, even if the Junkman’s history in this event leaves much to be desired (two one-and-dones and a quarterfinal loss in 2004). Els’ T-13 finish at Riviera was only the second time he’s cracked the top 15 since he won the Open, while Jacobson has posted back-to-back top-7 results.

Even with the extended layoff, Stricker should be able to get past his first-round opponent – though, it should be noted, that wasn’t the case in 2011 and ’10.

Watney has reached the quarterfinals each of the past three years, while Toms hasn’t cracked the top 50 in two starts this season.

DJ’s record in this event isn’t spectacular (three first-round losses), and he’s coming off two consecutive missed cuts, but he still should be able to handle Noren, who is making only his second Match Play appearance.

Toss-up here, but we’ll give the edge to McDowell, who always seems to hunker down in the tight matches. Paddy is coming off consecutive missed cuts, too.

Simpson lost in the first round in his only other appearance here, but a T-6 at Riviera shows he’s in good form heading back to the desert.

Hanson is making his season debut on Tour, but his top-22 finishes in the Middle East bode well for this week.

A surprisingly weak record for such a sweet swinger, but Oosty should face little resistance in Ramsay, who is seeing Dove Mountain for the first time.

This has the potential to go extra holes. Neither player has teed it up here before. Grace had top-6 finishes in the Middle East, while Garrigus hasn’t finished worse than 22nd this season. A true toss-up.

Donald is one of the best match-play performers in the world for a reason. He dominates in this one.

The Scot reached the Sweet 16 last year in his first appearance at this event since 2003, and has more match-play experience in general, but if Piercy gets the putter going, this one could turn around in a hurry.

This could be much closer than anticipated, especially if the weather is as nasty as forecasted. Rory should extend his visit past Wednesday, though, for he’s never lost in the first round here.

Give the advantage here to Rickie, who has top-6s in two of his three starts this season. Pettersson withdrew last week with the flu.

We hope it’s close, if only for the entertainment, but there is no better bad-weather player in the world than Tiger, and he’s clearly in good form.

Castano has played well in three European Tour starts, finishing no worse than 20th, while Molinari has only played once (a MC in Abu Dhabi).