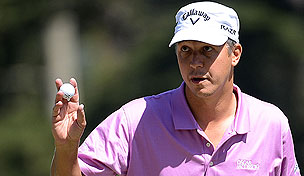 LOS ANGELES – A move down the California coast hasn't changed a thing for Fredrik Jacobson.

One week after his best finish in more than a year, Jacobson birdied the two toughest holes at Riviera on his way to a 6-under 65 on Friday and a share of the lead with Sang-Moon Bae going into the weekend at the Northern Trust Open.

The Swede did just about everything well, from his tee shots to his iron play, just what it takes to get around the classic design of Riviera. And it helps to get a little luck, such as a 55-foot birdie putt from just off the green at No. 9 that bumped along until disappearing for an unlikely birdie.

''That was probably the biggest bonus of the day,'' Jacobson said.

Bae played in the morning and began with four straight birdies, all of them from tap-in range until holing a 25-foot putt on the 13th. He wound up making birdies on half of his holes in his round of 65.

Still very much in the picture was Luke Donald, who chipped in twice for birdie and worked his short-game magic around the course for a 66. Playing for the first time in two months, Donald didn't look as if he had much rust. He was two shots behind.

Lee Westwood birdied the last hole for a 68 to join the group at 6-under 136 that includes a pair of major champions, Charl Schwartzel (67) and Webb Simpson (66).

Phil Mickelson was lurking, despite a sloppy double bogey on the 10th hole. Mickelson still managed a 67 and was five shots back.

''I had a little hiccup on the 10th,'' Mickelson said. ''I was just trying to make 4 and I couldn't even do that. But 4 under is not a bad round, with the exception of No. 10. That took a great round and turned it into a pretty good round.''

It sets up for a wide-open weekend along Sunset Boulevard.

Twenty players were separated by five shots. That included defending champion Bill Haas (67) and Matt Kuchar, who had a pair of double bogeys in a 73. They were four shots behind. Sergio Garcia bogeyed three of his last five holes for a 73 and was in the group at 4-under 138 that included Mickelson, Ernie Els and Adam Scott.

Jacobson has chronic back issues, and he has them under control at the moment.

Since his lone win at the Travelers Championship in the summer of 2011, he has only two top 10s in official PGA Tour events – a tie for eighth in Hartford as the defending champion, and his tie for seventh last week at Pebble Beach.

''I obviously take a lot out of that, just being in contention again,'' he said. ''I've had some good practice sessions before, but to bring it on the course and play under pressure, that's what it's about. And the sooner I can get back and put myself in this position where I can get some pressure, that's the best practice you can get.''

The shocker was that everyone finished the second round, a rarity at Riviera with a 144-man field. Robert Streb had to make par on his last hole for 70 players to make the cut. Instead, he missed a 5-foot putt and took double bogey. That not only allowed 10 players into the weekend at 2-over 144, but Streb wasn't one of them. His double bogey dropped him to 3 over.

Ryo Ishikawa, who made bogey on the 18th from the middle of the fairway, wound up making his first cut of the year.

Donald, the No. 3 player in the world, was one of three players from the top 20 who had yet to play a tournament this year, and they all played in the same group. Scott is still in the mix, while Graeme McDowell had a 72 and missed the cut by one shot.

Donald doesn't have the well-rounded game that took him to No. 1 in the world as recently as six months ago. His short game has carried him, a product of how much work he spent during his break from tournament golf over the last two months.

He holed a tough chip for eagle on the 10th hole Thursday, knocked in a chip just short of the 15th green Friday, and chipped in from about 70 feet short of the green on the par-3 fourth hole for his last birdie of the day.

''Tee to Green, I'm getting closer,'' he said. ''I'm very excited being sharp with my short game. It's nice to be in the mix this early. It's never easy to come off a long break and get straight back into the thick of things. A lot of my score comes from a good short game.''

Donald began his rise to No. 1 in the world two years ago by working with Dave Alred, a performance guru from Britain who is famous for working with rugby players such as Johnny Wilkinson. The latest influence is none other than Michael Jordan, though Donald says it's nothing more than spending time with the NBA great.

Donald spends half the year in south Florida, where Jordan is building a home.

Donald won an NCAA title at Northwestern and he first met Jordan in Chicago. He says they are simply friends – ''In no way am I working with Michael at all'' – although it doesn't hurt to be around someone with such a winning pedigree.

''It's great just to be around someone that was arguably the greatest of all time in his sport, just to see how he reacts, his demeanor, see his attitude toward things,'' Donald said. ''It's been nice just to spend a little bit of time with him.

''I try to pick up things from just watching him,'' he said. ''I ask him some questions and he gives me answers sometimes. Certainly, it's not like a working relationship. It's just nice to have access to someone that was that great at his sport.''

Donald still doesn't understand how he has played the 10th hole so well this week. That hasn't been the case for others.

Dustin Johnson started Friday morning on the 10th hole and went over the green, and then his next shot plugged slightly in the back bunker. His third shot popped onto the green, just barely, and rolled back into his big footprint in the sand. It took him two more shots to get out, and he was happy to leave with a double bogey. Another short-game error late in his round led to a double bogey, and Johnson had a 69, to miss the cut by one shot.