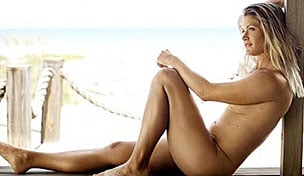 When Suzann Pettersen was approached by ESPN The Magazine to appearnude in its annual 'Body Issue,' she saw it as a compliment.

'A lot of the best athletes in the world have done it, and I thought itwas great to be asked. I thought about it, being naked and all, but Inever really considered not doing it,' Pettersen told USA Today.

'I just had to make sure that I was comfortable in doing it. It's asnatural as it gets. It's health at its peak.'

The fourth-annual issue, which comes out on Friday, features Pettersenand 26 other athletes in poses intended to show off their physique (attached photo is courtesy of Jeff Lipsky, ESPN The Magazine). Theworld No. 6 is joined by the likes of soccer star Abby Wambach andToronto Blue Jays slugger Jose Bautista.

Despite working out almost every day for two hours, Pettersen admittedfeeling awkward being nude for almost the entirety of a five-hour photoshoot.

'The photographer asked me if I felt comfortable being naked in front ofa camera, and I went, 'Well, here I am,'' she said. 'You kind of getused to it.'

Don't expect Pettersen to pose nude again, but she was glad she did itthis once.

'This was a great opportunity for me,' she said. 'If they present thephotos in the right way, which I'm sure they will do, there's not goingto be anything to be embarrassed about or to criticize.'