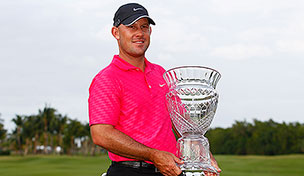 Since his breakthrough victory at the Puerto Rico Open, he has answered some 300 calls and text messages, smiled through every media obligation and, even more impressive, continued to playsolid golf. Brown’s two-day total of 2-under 140 has him five shots off Shawn Stefani’s 36-hole lead at the Tampa Bay Championship.

“Being on the golf course is kind of a getaway from everything that’s going on,” he said Friday.

After beginning the season with conditional status (this is only his third start), Brown’s victory at the opposite-field event came not with a Masters berth but something less tangible – peace of mind. The biggest perk – aside from the $630,000 paycheck, of course – is the two-year exemption on Tour.

“I think it’s more of a relief than anything,” he said. “Just proving I can win out here. It’s a big deal. I’m on cloud nine, but I kind of expected to be in that situation.”

Brown, 29, described the hours of media responsibilities as “mentally draining,” but added that “if you’ve got media attention, that’s a good thing, right?”