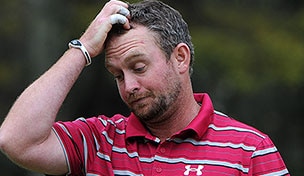 After a second consecutive round of 5-under 67, Steve Wheatcroft finds himself in an unfamiliar position – atop the leaderboard at a PGA Tour event. Here's the scoop heading into the third round at the Shell Houston Open, where Wheatcroft holds a one-shot lead over a pair of golfers:

What it means: Having only even gained entry into this week's field through a Monday qualifier, Wheatcroft now finds himself in sole possession of the overnight lead on the PGA Tour for the first time in his career. While many of the bigger names like Phil Mickelson and Rory McIlroy struggled to make the cut, the veteran of the Web.com Tour appeared at ease while carding a bogey-free 67 Friday.

Round of the day: Still seeking his first win since the 2009 Open Championship, Cink carded a 6-under 66 Friday, the lowest round of the day. The Georgia Tech alum notched three straight birdies from holes 4-6 and added three more on the back nine, completing his second round without a bogey.

Best of the rest: Though he still missed the cut, Peter Tomasulo deserves credit for an impressive turnaround. After a lackluster 82 Thursday, Tomasulo was a whopping 15 shots better during the third round, one of just three players (along with Wheatcroft and Josh Teater) to card a 5-under 67 Friday.

Biggest disappointment: In need of a strong finish to secure an invitation to the Masters, Geoff Ogilvy fell apart Friday. The Aussie shot a 7-over 79 in the second round, including a quadruple-bogey 7 on the par-3 seventh hole, and missed the cut by a wide margin. Though he is currently No. 50 in the world rankings, the missed cut will likely drop him outside the top 50 and deny him a return trip to Augusta.

Main storyline heading into Saturday: Can the unknowns stay out in front? Of the top five players on the leaderboard, three are seeking their first career PGA Tour win, while Points has only one win to his credit and Cink has not hoisted a trophy in nearly four years. Strong players loom just a few shots off the lead, though, including Haas and Dustin Johnson, who is 5 under through 36 holes.

Shot of the day: A runner-up here a year ago, Carl Pettersson was in danger of missing the cut after opening with a 2-over 74 Thursday. He was able to advance to the weekend, though, largely thanks to his effort at the par-3 seventh hole Friday, where the Swede recorded a hole-in-one from 174 yards out en route to shooting a 3-under 69.

Quote of the day: 'This is about the same position I was in in 2011 when I ended up winning, I was about 50th...I finally feel like my game is in the position to light it up, where when I go to the range I'm not trying to search for something.' – Mickelson, who begins the third round nine shots off the lead at 1-under 143.